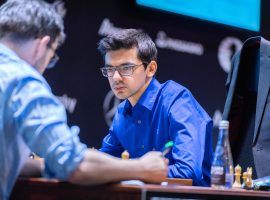 Anish Giri moved to within a half-point of the lead at the FIDE Candidates Tournament with a win over Ding Liren in Friday’s Round 11 action. The win put Giri right on the heels of leader Ian Nepomniachtchi, who scored a draw against former World Championship challenger Fabiano Caruana. Giri […]