The International Olympic Committee (IOC) backed off somewhat on its support for esports appearing in an Olympic program after a meeting on Saturday, calling such talk “premature.”

That proclamation came after IOC officials met in Lausanne for the seventh Olympic Summit, during which many sports-related topics were discussed, including if esports could be included at the 2024 Summer Olympics.

However, after the meeting, such an inclusion seems unlikely. According to a statement released by the IOC after the summit, the committee still has several questions as to how or if esports can be integrated into the Olympics.

These include the fact that the most popular games in the esports landscape are always changing, that some games “are not compatible with the Olympic values,” and that the gaming industry is “commercially driven,” as opposed to the sports movement, which the IOC called “values-based.”

“For all these reasons, a discussion about the inclusion of esports/egames as a medal event on the Olympic programme is premature,” the statement read.

But while that message might be disappointing to some esports fans who would like to see Overwatch, Dota 2, or Starcraft contested alongside swimming and basketball, the statement also offered some indications that the IOC could still change its mind in the future.

For one, the committee seemed to agree that there was a physical component to esports competition, even if it wasn’t up to the level seen in most sports currently on the Olympic program.

“It was agreed that competitive gaming entails physical activity which can be compared to that required in more traditional sports,” the statement read. “This, on the other hand, cannot necessarily be said to apply to leisure electronic gaming. For this reason, the use of the term sport with regard to esports/egames needs further dialogue and study.”

One ongoing issue for the IOC has been the “values” of competitive video games. In short, because some games feature violence in their gameplay, Olympic officials question whether those titles could ever fit in with the tone of the Olympics.

“We cannot have in the Olympic program a game which is promoting violence or discrimination,” IOC president Thomas Bach told the Associated Press in September. “They, from our point of view, are contrary to the Olympic values and cannot therefore be accepted.”

However, the IOC did acknowledge that at least one genre of gaming gets around the values issue and some of the other uncertainties they cited: games that are based on real world sports.

“Because of this, accelerated cooperation with regard to these kinds of esports is encouraged by the Summit,” the statement read.

Federations were encouraged “to explore the potential benefits and applications of the electronic and virtual versions of their sports.”

Even beyond sports games like Madden or FIFA, however, the IOC made sure to note that they weren’t dismissing the idea of including esports eventually.

“It was agreed that the Olympic Movement should continue to engage with this community, whilst at the same time acknowledging that uncertainties remain,” the IOC wrote. 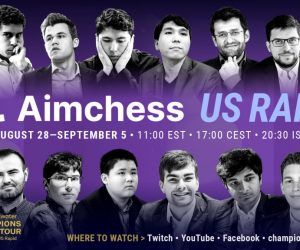