Henry Cejudo has officially vacated the UFC bantamweight title after announcing his retirement following his win over Dominick Cruz at UFC 249 earlier this month.

UFC officials told ESPN that Cejudo is now considered retired, and he is no longer listed in the company’s official rankings.

Cejudo talked about his retirement in an Instagram post on Monday, thanking UFC president Dana White for the opportunities he had in the promotion.

“Thank you for taking a chance on the sport that people thought would never make it,” Cejudo wrote. “To all my coaches and fans it [has] been a wonderful ride. Triple C is out.”

Cejudo (16-2) simultaneously held titles in the bantamweight and flyweight divisions. The 33-year-old has not lost since 2016, though he had given up his flyweight title in Dec. 2019 to focus on his bantamweight crown.

The UFC plans to hold UFC Fight Night: Woodley vs. Burns on Saturday at the company’s Apex facility in Las Vegas. That location is subject to change until Wednesday, when the Nevada Athletic Commission will vote on whether combat sports can resume in the state. But all signs are that the show will go on at the UFC venue.

According to a memo sent by the company, the UFC will implement stricter COVID-19 testing procedures for Saturday’s card. MMAJunkie.com and ESPN reported that competitors will now take two coronavirus tests before they fight, one when they check into the athlete hotel and another after their weigh-in.

Following the second test, athletes and their teams must self-isolate overnight until it is time to head to the Apex for the show.

“During this time, no athletes or cornermen will be permitted to leave the Athlete Hotel without express prior approval from the Nevada State Athletic Commission,” the memo says. “You also should not have physical contact with anyone other than the members of your camp.”

As previously reported, Tyron Woodley will take on Gilbert Burns in the main event of Saturday’s UFC Fight Night. FanDuel Sportsbook lists Woodley as a -184 favorite over Burns (+156).

The company has since announced a full card for the show, including a co-main event between heavyweights Blagoy Ivanov (18-3) and Augusto Sakai (14-1-1). Sakai (-112) comes into the bout as the slightest of favorites over Ivanov (-104). Other main card bouts include a welterweight clash between Kevin Holland (-235) and Daniel Rodriguez (+196), as well as a women’s strawweight fight featuring Mackenzie Dern (-390) and Hannah Cifers (+310).

Other future cards are also starting to come together. Women’s flyweights Jessica Eye and Cynthia Calvillo will headline a June 13 card, though a location for the event has yet to be determined. 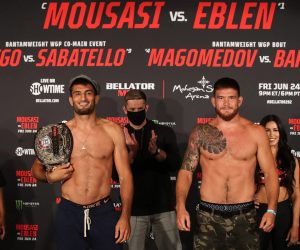 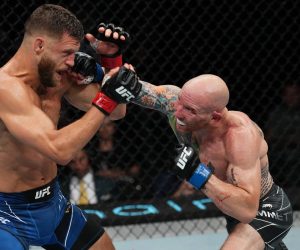