Home Sports Betting Skiing With Shiffrin Out, American Breezy Johnson Has Chance to Shine in Austria

Mikaela Shiffrin announced on New Year’s Day that she’ll be sitting out speed events this season, which means fans of the US Ski Team might turn their attention to Breezy Johnson as one to watch in the run-up to the 2022 Beijing Games.

The 24-year-old Jackson Hole native will be in action this weekend as the women’s alpine World Cup continues with a downhill at Austria’s St. Anton am Arlberg on Saturday.

Out of Shiffrin’s Shadow, Johnson Aiming for Top of Podium

Johnson, a downhill specialist, has already notched a pair of third-place downhill finishes this season — the only two career podiums of her career thus far. This mountain, however, has a special kind of magic for US skiers not named Shiffrin or Vonn.

The only woman to win a World Cup event besides the two superstars above is Colorado native Alice McKennis, who won the downhill in St. Anton am Arlberg in 2013.

Will Breezy break out of her third-place doldrums and find luck on the speedy and compact Austrian course? At +1000 (Bwin), she might not be a bad bet.

Suter-Goggia Rivalry Heats Up the Downhill

Those seeking out a favorite on Saturday should look no further than Swiss downhill specialist Corinne Suter (+300) to dominate on the hill that many consider the cradle of alpine skiing.

Suter won the downhill and super-G crystal globes last season, and currently shares the lead in the downhill World Cup standings with Italian Sofia Goggia (+300); they’re knotted at 180 points. She won the opening downhill event in the World Cup event of the season in Val d’Isère last Dec. 18. Suter was then runner-up behind Goggia in the second race at the same ski resort.

The 26-year-old also finished in the top two in each of the last four World Cup downhill events, and has reached the podium every time since a fifth-place finish in Garmisch-Partenkirschen on Feb. 8, 2020. Suter has amassed eight podium finishes since the start of 2019 in World Cup women’s downhill events, double the amount of any other skier in the downhill currently on the circuit.

Goggia, in the meantime, could win back-to-back World Cup downhill races for the second time in her career. She posted successive wins in January 2018, one at Bad Kleinkirchheim and the other at Cortina d’Ampezzo.

Among Italian women, only Deborah Compagnoni (16), Isolde Kostner, and Federica Brignone (15 each) have more career World Cup victories than Goggia with eight. However, Goggia’s career 29 podiums are tops among her countrywomen.

Brignone (+1200), the 30-year-old veteran who finished third in last season’s downhill standings has been skiing fast this season. On Saturday, Brignone can become the second Italian skier with a downhill win to claim a World Cup event in four different disciplines. Currently, Gustav Thöni is the only Italian to accomplish that feat.

There’s a tremendous amount of parity among the women this season, as shown by the fact that the last seven women’s World Cup events were won by seven athletes, including Petra Vlhová, Michelle Gisin, Ester Ledecká, Sofia Goggia, Corinne Suter, Mikaela Shiffrin, and Marta Bassino.

Who will be the next woman to step to the top of the podium this weekend? 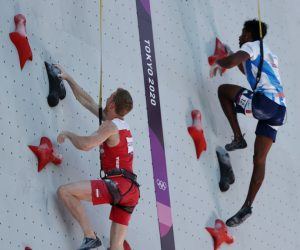 Sport Climbing: A New Sport with a New Format is Ready to Rock the Tokyo Olympics