The NBA Finals are heading back to Cleveland for game six with the defending champion Golden State Warriors up three games to one on the Cavaliers.

While a game six between the Cavs and Warriors, the latter a team that has set multiple records this season including winning an astonishing 88 regular and postseason games should be the focus, it’s the critics of the NBA who are receiving the most type space.

Days before game five in Oakland, the NBA announced Warriors power forward and emotional leader Draymond Green was being assessed a Flagrant 1 foul for striking LeBron James in the groin during game four. The flagrant foul was Green’s fourth of the playoffs, which automates a one-game suspension.

“The cumulative points system is designed to deter flagrant fouls in our game,” NBA Executive VP of Operations Kiki VanDeWeghe said in a statement. “While Draymond Green’s actions in Game 4 do not merit a suspension as a standalone act, the number of flagrant points he has earned triggers a suspension for Game 5.”

No Draymond, More LeBron (and Kyrie)

Averaging 15 points per game and nearly 10 rebounds, Green’s absence on June 13 was quickly apparent. Though the packed Oracle Arena tried its best to disrupt James’ flow with an onslaught of boos, the high-energy Green was nowhere to be found.

For the first time in NBA Finals history, two players on the same team scored over 40 points. James and Kyrie Irving each scored 41, with Irving having his way with fellow point guard and two-time reigning MVP Steph Curry.

The Cavs rolled 112-97 over the champs to take the series back to Cleveland.

Plenty of critics freely spoke their opposition to the NBA suspending Green. ABC/ESPN analyst Jeff Van Gundy opened the primetime broadcast by saying he didn’t believe Green should have been assessed the Flagrant 1 and been suspended.

Others went further in calling it nothing short of a conspiracy.

Disgraced former NBA referee Tim Donaghy told Sports Illustrated, “In the past, I believe it was disregarded because (the Warriors) were down in the series. Here, they’re up in the series, so I think it’s a situation where . . . it gives Cleveland a better chance of prolonging the series.”

Donaghy, of course, is the notorious ref who pled guilty to gambling on games in which he was officiating.

The ESPN message boards were also lively in debating Green’s suspension, with many under the impression that it was a revenue grab by the NBA in hoping to extend the Finals to game six.

NBA Commissioner Adam Silver said during a previous altercation involving Green and a player’s groin, “We do full investigations . . . Swear to the world that we do the best we can and that we don’t prefer one market or one team over another.”

The NBA Finals continue on June 16 at 9 pm ET, and the Cavs down a game are currently favored to take the series to game seven. The Westgate SuperBook in Las Vegas has Cleveland as a two-point favorite.

The Warriors resolve remains, especially with Draymond Green back for game six.

“I like our position a lot better than theirs,” Golden State coach Steve Kerr said. 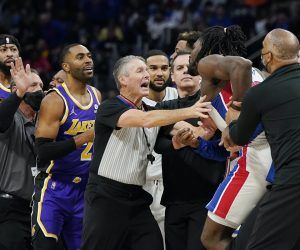