Manny Pacquiao will try to hand WBA welterweight champion Keith Thurman his first loss on Saturday when the two meet at the MGM Grand Garden Arena in Las Vegas.

While Pacquiao may now be 40 years old, he remains one of the biggest draws in boxing, and he has shown that he is still dangerous even when stepping into the ring against some of the top fighters in the world.

Pacquiao (61-7-2, 39 KOs) is riding a two-fight winning streak after scoring a TKO win over Lucas Matthysse last year to win the WBA’s “regular” welterweight title. He then defending that crown with a decision win over Adrien Broner in January. To make things more confusing, Thurman has the “super” version of the WBA welterweight title, a designation given to fighters who either hold the same title in multiple major organizations or who have defended their belt at least five times.

There have been many examples of great fighters who have continued to be effective past their 40th birthday. But it’s also true that aging boxers can decline rapidly at any time, which Pacquiao acknowledges will be a storyline every time he chooses to fight from here on out.

“In your job as a fighter you have to prove something,” Pacquiao told reporters at a press conference on Wednesday. “That’s why I’m so motivated for this fight and excited for Saturday. There’s a question mark of it I can still do it at the age of 40.”

For Thurman (29-0, 22 KOs), this fight gives him the opportunity to grab a signature win and keep himself in the picture as some of the top pound-for-pound fighters in the world try to stake their claim to the unified welterweight title in the years to come.

While he has yet to take a loss, The Ring magazine rates him third in the welterweight division behind IBF champion Errol Spence Jr. and WBO champion Terence Crawford, both of whom are also undefeated and considered among the best boxers at any weight class.

At Wednesday’s press conference, Thurman made it clear that while he respects his opponent, he also expects to win.

While Thurman will pose plenty of challenges for the older Pacquiao, he has shown vulnerability since coming back from a two-year layoff due to a series of injuries. His last two wins have been a split decision victory over Danny Garcia before the layoff, and a majority decision triumph over Josesito Lopez earlier this year – not the kinds of convincing wins that got him to the top of the division.

That may be why Pacquiao has been installed as a slight favorite. At FanDuel Sportsbook, Pacquiao can be backed at -132, while Thurman is listed at +108 to retain his title.

Still, Thurman is more confident than those odds would suggest, and says he’s planning on putting some money down on himself while he’s in Vegas.

“I’m a winner in life so to bet on myself in the opening round it makes me swing, swing, swing,” said Thurman, who claims he will bet on himself to win by knockout in the first, second, and “lucky seventh” rounds. You can’t just sit there and pump fake all day. So I want to encourage myself.”

As of Wednesday night, the sportsbook at the MGM Grand was offering 60/1 on Thurman to win by knockout in the first or second round, and 40/1 on a seventh-round finish. 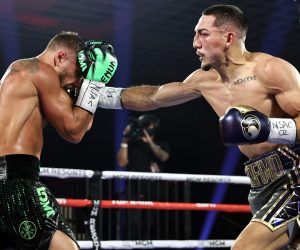 New York Can Make Giant Statement with Win Over Philadelphia