Jared Cannonier continued his unlikely ascent up the middleweight ranks by scoring a knockout victory over Jack Hermansson early in the second round at UFC Fight Night 160 on Saturday in Copenhagen, Denmark.

Cannonier finished the fight 27 seconds into the second round, when he landed a flurry of hammer fists against Hermansson after knocking him to the ground.

Cannonier Settling In at 185

Cannonier (13-4) has spent most of his MMA career trying to find his place in the sport, first fighting as a heavyweight in Alaska and, later in the UFC, before moving down twice, first to light heavyweight and, finally, to middleweight last November. The 35-year-old is now 3-0 in the 185-pound weight class, and was already ranked No. 9 in the world before beating Hermansson (20-5), who was ranked fifth before the bout.

“A lot of people are writing me off, probably because they don’t know me because I don’t run my mouth,” Cannonier said after the fight. “You’re gonna have to watch me do my thing. Eventually, it’s going to be for the title.”

Hermansson came into the weekend on a four-fight winning streak. Neither fighter has been strongly linked to an opponent for their next bouts, though another top-five middleweight opponent for Cannonier seems likely.

UFC legend BJ Penn (16-14-2) has been officially released by the UFC after videos surfaced in August showing him fighting on the streets with other men in Hawaii. While the 40-year-old Penn has argued that he was acting in self-defense, UFC president Dana White said earlier this month that the company no longer had any plans to book the former lightweight and welterweight champion.

“He won’t fight again, that’s it,” White told ESPN. “It’s not even that this was the last straw. I didn’t love him continuing to fight anyway, but with the relationship that he and I have, he gets me on the phone, begging me for another fight. It’s hard to turn him down.”

Penn lost his last seven fights – all with the UFC – dating back to October 2011.

Usman vs. Covington Booked for UFC 245

Colby Covington (15-1) will get a shot at the welterweight title this December, when he takes on champion Kamaru Usman (15-1) in Las Vegas at UFC 245, according to an ESPN report.

The fight, which seems like a natural matchup between the newly crowned Usman and the UFC’s biggest heel, has been stalled in negotiations between the two fighters for months. Usman opened as a -174 favorite over Covington (+142) at FanDuel Sportsbook.

The welterweight championship is one of three title fights currently scheduled for UFC 245, which will take place on Dec. 14 at T-Mobile Arena. Max Holloway (-188) will take on Alexander Volkanovski (+154) for the featherweight crown, while Amanda Nunes (-300) will battle Germaine de Randamie (+230) for the women’s bantamweight championship. 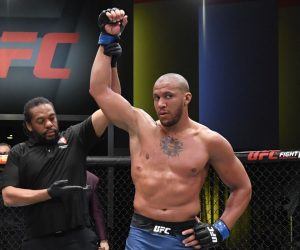