Floyd Mayweather Jr. believes that WBA lightweight champion Gervonta Davis is on the verge of becoming boxing’s next breakout star. The next step on that journey comes on Saturday night, when Davis takes on WBA super featherweight champion Leo Santa Cruz in front of a limited crowd at the Alamodome in San Antonio.

The fighters agreed to weigh in at 130 pounds so that both belts can be on the line for the pay-per-view bout.

Mayweather Sees Superstar in the Making

Assuming Davis (23-0, 22 KOs) has no trouble cutting weight, he’ll have a distinct size advantage. The undefeated lightweight may not enjoy the name recognition of Teofimo Lopez or Vasiliy Lomachenko, but Davis plans to be a factor in the division, and could certainly face Lopez at some point in the future for a unification bout.

If Davis can raise his profile between now and then, that future title fight could become a huge draw. Mayweather, who promotes Davis, thinks the fighter is well on his way to superstardom.

“He’s one of the biggest stars in the sport,” Mayweather said of Davis, via the Santa Maria Times. “I’ve laid down the blueprint and I’m going to keep helping him grow.”

Santa Cruz (37-1-1, 19 KOs) represents the toughest challenge of Davis’ career so far. The 32-year-old veteran doesn’t have big punching power, and that part of his game should play even worse against the bigger Davis. But Santa Cruz possesses far more big fight experience, and thinks he can outbox his younger opponent on Saturday.

“The way I see it playing out is it going all 12 rounds, and me beating him on a decision,” Santa Cruz told The Ring. “I’m going to be really smart and not get caught with his big punches. The only way he’s going to beat me is if he knocks me out because I’m going to be on top of him throwing a lot of punches, using my experience from the outside.”

Most observers expect the Davis game plan to win out. FanDuel Sportsbook lists Davis as a -600 favorite over Santa Cruz (+380). Digging deeper, Davis also stands as a -112 favorite to win by knockout or TKO.

But the Santa Cruz corner takes issue with those odds, especially given his history against other elite opponents.

“Leo has fought everyone and when has anyone ever done that to him?” Promotor Leonard Ellerbe told Yahoo Sports. “This fight is one that Leo wanted. He knows what Tank is all about, and he thinks he can take advantage of him and beat him.”

The biggest problem for Santa Cruz is that he generally prefers to stand and trade with his opponents. Even though he doesn’t win most of his bouts by knockout, he has come out on top time and again in slugfests. His team plans to have him fight from the outside to try and stay away from the lightweight’s power. But Davis still wants to put in a performance that audiences will remember.

“I’m definitely excited after all of this going on to be able to fight in front of fans,” Davis said. “I’m ready to put on a show.” 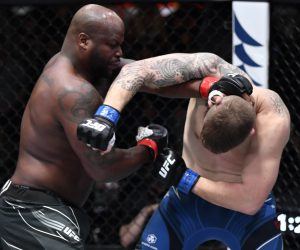