Home Content Marketing Who Hates Who? Breaking Down Premier League Rivalries among the Big 6 and Their Fans

There is possibly no greater rivalry in all of sports than Liverpool vs Manchester United. The animosity between the two cities has economic ties that can be traced all the way back to the 19th Century, when Liverpool was England’s main port.

We surveyed 2,000 football fans with the goal of learning more about the fierce rivalries that have formed between clubs across the Premier League.

Which supporters are considered the most annoying on social media? Which set of fans are perceived as the most deluded and the least intelligent? Finally, which club is the most disliked across all twenty teams?

We learned Liverpool’s followers have been deemed the most annoying on social media. The vocal and often opinionated fans of the Gunners are thought of as the most deluded.

Want to learn how all 20 clubs voted in our survey?

We also learned success often leads to contempt, jealousy, or both. When it came to finding teams at or near the top of the list in all four categories, you didn’t have to look any further than the clubs who form the so-called Big 6.

Here we dive deeper into the fans who cheer for the six most disliked teams in the Premier League.

We break down how each individual fanbase from the Big 6 voted in all four of our categories and detail exactly who doesn’t get along with who.

For Premier League bettors and fans of the Big 6 clubs, sometimes there can be as much satisfaction in placing a winning football bet against your biggest rival as there is when you are cheering on your favorite team to a big win.

Liverpool fans love the fact their club has won the European Cup / Champions League six times, while Manchester United has only claimed three.  However, all Reds supporters know they trail 20 to 19 all-time in league championships and that cannot sit well.

When it came to our survey, Liverpool fans surprised no one when they voted Manchester United fans at the very top of all four categories in our survey.

When it came to the most deluded fans category, Reds fans voting Manchester City right behind Manchester United might be considered a bit of a shock.

Can a fanbase who has watched their team win three of the last four Premier League titles and five of the last 10 be considered deluded? We sense a little bit of jealousy from Reds supporters directed toward the Citizens. 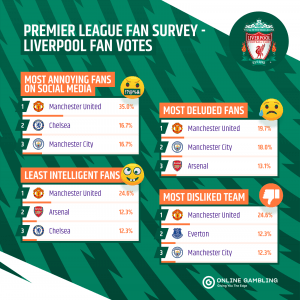 43% of all Liverpool supporters voted for Manchester United as their most disliked team. Second place went to Everton, who garnered only 10% of the vote, leaving no doubt who fans perceive the Reds’ biggest rival to be.

Arsenal supporters might be considered the fanbase other fanbases love to hate. Of the four questions we asked our participants, the Gunners finished at the top of the list twice, including most deluded and least intelligent fans.

When it became time to cast their own vote, followers of the Gunners didn’t care for the social media content being pumped out by Manchester United and Chelsea fans. Both those teams received more than 20% of the Arsenal vote in the most-annoying social media category.

Otherwise, Arsenal supporters were pretty obvious with their disdain for all things Tottenham. Spurs received the most votes from Arsenal fans in all three remaining categories. 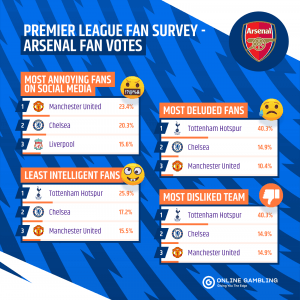 Tottenham Hotspur have not won a league title in a very long time. More than 40% of Arsenal fans who voted in the most deluded fanbase category cast their ballot towards those optimistic Spurs supporters who will always believe that next year will finally be their year.

Earlier we mentioned how Liverpool fans voted the Red Devils at the top of their list in all four categories of our survey. When we analyze how Manchester United fans voted, it’s obvious the feelings of dislike between the two clubs is very mutual.

Red Devils fans put Liverpool at the top of their list in the most annoying on social media, the least intelligent and the most disliked team categories. 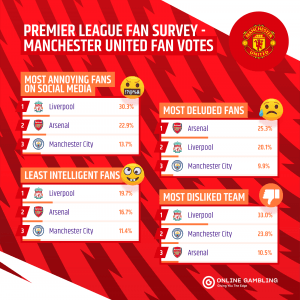 When it came to the most deluded fans, though, not even the United faithful believed that the Reds’ supporters deserve that title, although the vote was close.

Instead, the honor of most deluded went to Arsenal, who collected over 25% of the votes. If Manchester United fans are not voting the Liverpool supporters to the top of this list, then how deluded must they think the Arsenal faithful are?

If you have ever been inside Stamford Bridge when thousands of Chelsea fans are chanting “Stand up if you hate Man U”, you might believe Blues supporters dislike the Red Devils more than any other Premier League club.

Traditionally Chelsea fans have often been accused of disliking Leeds greater than all other clubs.

However, when we analyzed how Chelsea fans voted in our survey, it was Arsenal who surprisingly received the most votes in all four of our poll questions.

40% of Chelsea fans voted Arsenal as most deluded and 38% voted the Gunners faithful as most annoying on social media. 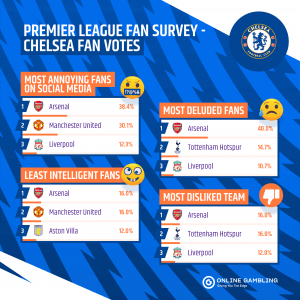 Only when we asked Blues supporters who the least intelligent fans were, was Arsenal not the decisive winner.  In this case, Chelsea fans were torn between the Gunners and Red Devils. Both teams split the dubious honor of being branded least intelligent, each earning 16% of the vote.

When you have won three of the last four Premier League titles, and five of the last 10 overall, it’s most probable opposing fans dislike you more than you take issue with them.

However, when you play in a stadium located only four miles down the road from a team with the most titles in league history, it’s easy to understand why City fans might feel somewhat overlooked and underappreciated. 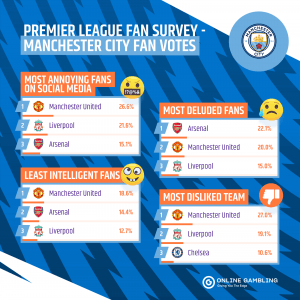 When it comes to voting the most annoying fans on social media, the least intelligent fans and the most disliked team, City supporters were clear with their dislike for those who support that other team from Manchester.

However, what needs to be pointed out is how even the City fans felt the need to call out the Arsenal faithful as the most deluded of the bunch.

Clearly City take issue with all things Manchester United, but like many other fanbases who took part in our survey, City fans pushed aside their dislike of United and called out the Gunners as the most deluded group of supporters.

We asked Spurs fans who the most annoying team on social media was and more than 56% of them voted for north London rivals Arsenal. Second place went to Manchester United at 15%

We asked Spurs fans who the least-intelligent fans were and more than 42% of them voted for Arsenal. Second place went to fellow Londoners West Ham at 12%.

We asked Spurs fans who the most deluded fans were and 39% of them voted for Arsenal.  Second place went to Manchester United at 16.5%

Would you like to guess who Spurs fans voted for when we asked them which team they disliked the most? 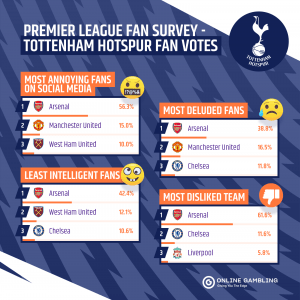 53 of our Spurs fans voted Arsenal as their most disliked team. The remaining 18 teams received only 33 votes combined, leaving no doubt just how the Tottenham faithful feel about those who play and cheer for the Gunners.

Sports betting experts don’t expect this will be the year that Tottenham ends their Premier League title drought, but Spurs fans can always find solace when their rivals from Arsenal are defeated as well.

Liverpool finished our survey as the club with the fanbase deemed to be the most annoying and earned the dubious right to be called the most disliked team in the league.

Manchester United and their 20 titles finished runner-up to the Reds as the most disliked team.

One of the things we learned from our survey is that with great on-field success comes contempt, jealousy, or resentment from other Premier League fans.

How did fans who cheer for teams outside the Big 6 vote in our survey?

Overall, it was Arsenal and their loyal fans who really stood out to us when we tallied up all the votes.

Despite not having won a league title since 2004 and even though Chelsea, City and United have all won five titles since the Gunners last claimed one, it was Arsenal who finished with the most votes in two of our four categories and in the process earned the dubious distinction of being classed as the least intelligent and most deluded fans.

Maybe if Arsenal can go on to play as well as their supporters are suggesting they can, the survey votes will look different next time around.