There is no doubt the Premier League is the most-watched sports league across the globe. An estimated 640 million homes world-wide tune in and watch their favorite teams and players from the EPL.

Maybe the only thing football fans and Premier League bettors enjoy more than cheering on their chosen club, is against their biggest rivals.

Premier League fans: which fanbase is the most disliked?

Who are the most annoying fans on social media? Which fanbase is the most deluded and who are the least intelligent? We asked the tough questions to 2,000 Premier League football fans and this is what we found out. 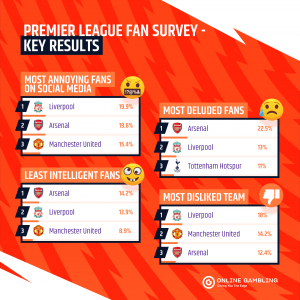 The above chart gives a quick glimpse of the three teams with the most votes in each of our four categories. It is easy to notice that Liverpool, Arsenal and Manchester United are at or near the top in each one.

It is no coincidence that the three most successful clubs in top-flight history are also Manchester United, Liverpool and Arsenal. Those three clubs have won a combined 52 league titles since 1889 and have obviously built up quite a following of both supporters and detractors over that time.

Find out how the Big 6 teams voted in our survey?

Which Premier League team has the most annoying fans on social media?

The rising popularity of social media has only enabled the verbal jousting to grow among opposing fans. It is easier than ever today for fans to trade compliments and, more-likely, insults about their biggest rivals and competitors.

The first question we asked in our survey is which teams had the most-annoying fans on social media and this is what we learned: 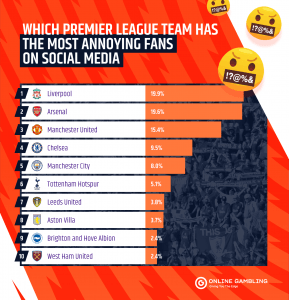 It was tight at the very top between Liverpool and Arsenal, with Manchester United solidly in third. The Reds and Gunners each receiving almost 20% of the vote is not a surprise, but what is interesting is where their votes came from.

Manchester United fans seem almost torn between who they dislike more. 49.5% of their supporters voted for the Reds, while 38% of them felt Arsenal supporters were the most-annoying bunch.

For the Gunners to have finished 8th in the Premier League last season but still receive almost 20% of the vote is a testament to the enduring impact of all the Gunners out there.

Which Premier League team has the most deluded fans?

Arsenal supporters last celebrated a Premier League title in 2004. They finished second in 2016, but have done no better than a pair of 5th-place finishes since.

However, the passion and annual belief that ‘this is their year’ the Gunners continue to display for their squad has earned them the title of most-deluded fans in our survey. 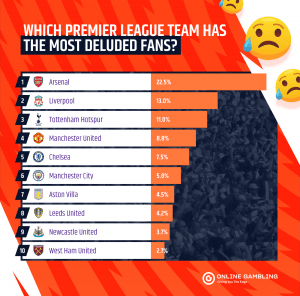 Arsenal received at least 10 votes from the fans of nine separate clubs. The variety of fans who think they are most deluded is intriguing and Gunners supporters were the clear runaway winners in this category.

Tottenham Hotspur were also high up on our list. Spurs finished with 179 total votes, behind only Arsenal and Liverpool. The last time Tottenham won the top-flight title was in 1961 and rival supporters seem all too aware of this fact when weighed against Spurs fans’ expectations.

Which Premier League team has the least intelligent fans?

Since the Gunners last won a championship, Manchester City, Manchester United and Chelsea have all won five titles each. It can be difficult constantly defending your team and players when your club doesn’t back it up with results.

No doubt Arsenal’s lack of recent success – married with their alleged delusions – is one of the reasons why their supporters earned the dubious title of least intelligent fans. 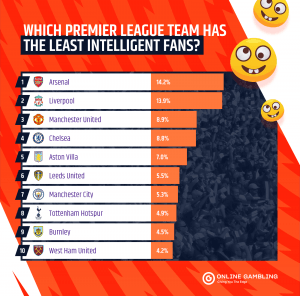 The Gunners fanbase received exactly 200 votes and Liverpool supporters were right behind them, finishing only four votes back.

It’s worth pointing out that by finding themselves at the bottom of this list, Wolverhampton and Southampton could possibly make a claim as the most-intelligent fans.

Wolves and Saints won only 12 games each last season, and sports betting experts don’t expect many more from either club this year. Maybe both teams and their fans should consider it a victory that they earned less than 2% of the vote in this poll.

Which Premier League team do you dislike the most?

It’s often noted that success breeds jealousy.  When it comes to disliking other football clubs, more often than not fans are jealous of those who achieve what their own teams can’t.

We polled our 2,000 fans about which team they disliked the most. Our results show there is an obvious link between clubs with the most titles and the teams who received the most votes. 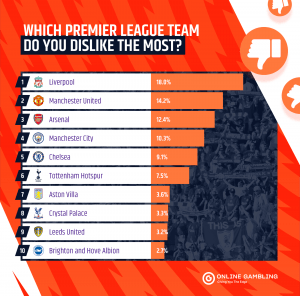 Most of us want to be liked. However, if the reason you were disliked was because you have combined to win more than 50 top-flight titles, like the top three teams in this survey have, you probably wouldn’t mind being so unpopular.

If we had done our poll 11 years ago, we suspect Manchester City might be ranked just a little lower on our list.  However, when you have won three out of the last four league titles, and five of the last 10 like the Citizens have, your list of haters will grow in a hurry.

Although it has been a very long time since Spurs won a league title, they still finished 6th overall on our list. This proves our theory that there are ways besides winning titles to get yourself disliked.  The Big 6 all finished at the top of this list, regardless of whether they have achieved any recent success in the Premier League.

Teams that would be classed as underdogs draw fewer unhappy glances from rival fans.

The more successful the club is, the more likely rival fans will resent them. Success can be determined by league titles, or by the ability of a club to make money and spend money in a way most other teams can’t. The fact that the Big 6 teams are all found at the top of our lists for each of the questions we asked shouldn’t be a surprise.

The good news for fans is that every time a Big 6 team wins a league title, the five other teams have to lose it. Savvy supporters and football bettors often know who is likely to win and, just as importantly, who isn’t.

Is Liverpool still Man United’s biggest rival or has Manchester City taken over that role?

There are also teams like Villa and Leeds found high-up in our poll. These teams have achieved great success in the past, but very little recently in top-flight terms.

Perhaps football fans are also not so forgiving of those who are still clinging to their past glories.