Vasiliy Lomachenko will look to defend his WBA and WBO lightweight titles – and pick up the vacant WBC belt – on Saturday when he takes on Luke Campbell at the O2 Arena in London, England.

Lomachenko comes into the fight as one of the best pound-for-pound boxers in the world according to most analysts, with The Ring rating the Ukrainian just ahead of undefeated welterweight champion Terence Crawford as the world’s best fighter.

Trainer: Campbell at His Peak

That puts him in a different class than Campbell (20-2, 16 KOs), who is rated as the No. 2 contender in the lightweight division by The Ring. But while he may not have the accolades of his illustrious opponent, Campbell is a 2012 Olympic gold medalist with a resume that makes him a legitimate contender.

Campbell has won eight of his last nine bouts, with only a split decision loss in a WBC title bout against Jorge Linares – whom Lomachenko beat decisively last May – blemishing his record. And while few give him a chance on Saturday, Campbell’s team thinks he has tools that could cause trouble for the champion.

“Luke is huge at the weight, punching extremely hard and I believe he is at the peak of his career,” Shane McGuigan, who trains Campbell, said at a pre-fight press conference. “I’ve never seen Luke out of his comfort zone. No matter who he is put in with he rises to their ability. It’s going to be always hard to prepare for a guy as unique as Lomachenko. But I believe this is Lomachenko’s hardest fight.”

Lomachenko Expected to Cruise to Victory

None of that talk is likely to bother Lomachenko (13-1, 10 KOs), whose only loss came via split decision in the second fight of his career. Even taking a fight in his opponent’s backyard, where Campbell is likely to have most of the crowd backing him, doesn’t bother the champion.

“I don’t know because I am fighting a famous British guy, he has a lot of fans and we are here in the UK,” Lomachenko said at the press conference. “But I don’t care about it. Of course it is not easy, but I have a dream and that is to unify the title and that is why I have come here.”

Campbell has some advantages he can try to utilize in the ring on Saturday. Most of those are physical: he truly is the bigger fighter, with noticeable height and reach advantages over the champion.

But it’s hard to see exactly how he’ll be able to translate that into a victory. Lomachenko is one of the greatest technical fighters in recent memory, punishing even the smallest of mistakes from his opponents with world-class footwork and precision. It shows in his overall record: while his professional career is short for someone with such a big reputation, he spent many years as an amateur, and has lost only twice in 412 total fights.

With that in mind, the obvious pick is for Lomachenko to win, likely in a knockout in the middle rounds. FanDuel Sportsbook has made the Ukrainian a -1600 favorite over Campbell (+800), but even those odds may understate how monumental an upset it would be if the challenger walked away a winner on Saturday. 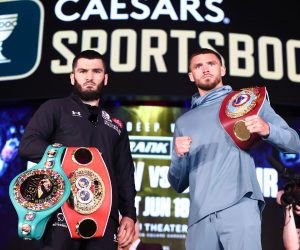