Vanderbilt finished the 2018-19 season with an 9-23 record with an 0-18 clip in conference play. The Commodores finished in last place or 14th out of 14 teams in the SEC. Drew lost twenty games in a row to end the season.

Scottie Pippen, Jr., the son of NBA great Scottie Pippen from the Chicago Bulls, is one of Vanderbilt’s top incoming recruits next season.

For a hot second, Rick Pitino was rumored to be on the short list of Vanderbilt coaching candidates. Instead, Vanderbilt decided to hire a high-profile name and former NBA All-Star hoping that Jerry Stackhouse could help sway future recruits.

Vanderbilt began the season with four straight wins and begin the season 9-3. Those nine wins would be as high as they’d get. Who would have thought that they would lose the next 20 games in a row?

The early run through the first dozen games included victories over #18 Arizona State, USC, and Liberty. However, it also included wins against UNC-Asheville, Winthrop, Alcorn State, and Savannah State.

December 31, 2018 would be the last game the Commodores would win all season. They ran in the new year with a victory, but never saw another W. Once SEC basketball conference play commenced in January, it was all downhill.

Vanderbilt forced Tennessee, #1 in the nation at the time, to beat them in overtime by two points. That heartbreaking loss put Vandy at 9-9 on the season. Perhaps that could have been a pivotal point for the team.

The SEC is one of the toughest conferences in all of college basketball. With Kentucky, Tennessee, and Auburn on your schedule multiple times a year, those conference games can certainly toughen up a team. In Vanderbilt’s case, they wilted under pressure. As a result, they lost 19-straight games to end the regular season. They headed into the SEC Conference with an outside glimmer of hope. Alas, Texas A&M crushed them by 17 points and Vanderbilt struggled to even score 52 points.

Jerry Stackhouse, 44, is one of the all-time greats from North Carolina. He played under legendary coach Dean Smith in the early 1990s.

Stackhouse headed to the pros as a coveted draft pick. The Philadelphia 76ers selected him with the third overall pick in 1995. He played 18 seasons in the NBA with eight different teams including Philly, Detroit, Washington, Dallas, Milwaukee, Miami, Atlanta, and Brooklyn.

Stackhouse pivoted to coaching. He excelled in the NBA’s developmental league coaching the Raptors 905 and became the G League Coach of the Year in 2017. Stackhouse landed a gig as an assistant coach with the Toronto Raptors and then the Memphis Grizzlies.

The Vanderbilt job will be Stackhouse’s first coaching job in the collegiate ranks. He joins Penny Hardaway as another former NBA-star who is coaching in the NCAA. Hardaway accepted the head coaching position at his alma mater Memphis last year. He also landed the top big man in the country, 7-footer James Wiseman, who also happens to be from Memphis. 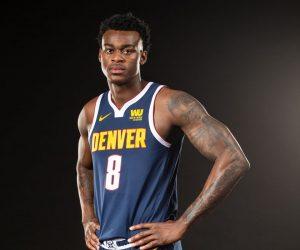