The first round of golf’s Scottsdale Open, a three-round mini-tour event in the Arizona city, begins Tuesday at Talking Stick Golf Club’s North Course. The event has attracted several PGA Tour players, three of whom are top picks to win.

The tournament is part of the Arizona-based Outlaw Tour. It’s one of a few professional men’s tours that has held regular events since the COVID-19 global pandemic shut down the sport after the first round of The Players Championship on March 13.

Joel Dahmen, who has never won on the PGA Tour, is the 5/1 favorite to win the Scottsdale Open. He is followed by Kevin Streelman (12/1), and Alex Cejka (14/1). Streelman has two PGA Tour victories, the 2013 Tampa Bay Championship and the 2014 Travelers Championship. Cejka won the 2015 Puerto Rico Open.

Dahmen and Streelman both live in Scottsdale and will enjoy a home match. Cejka lives in Las Vegas, which is just a short flight from Arizona.

In addition to those four PGA Tour players, others will be in the field. Dylan Wu, Nate Lashley and JJ Spaun have all registered to play.

The Scottsdale Open field has delighted tournament director Ryan Pray, who told reporters this should be one of the best fields in the four-year history of the event.

“We’ve had strong fields in the past, but we expect this to be our best yet due to the interest we have received from PGA Tour players,” Pray said.

Arizona has been under a strict stay-at-home order, but golf courses have continued to stay open.

“We are excited that we don’t need to postpone this event, and eager to get out to Talking Stick Golf Club for the fourth edition of the Scottsdale, Arizona Open,” Pray said. “We have been watching the COVID-19 crisis very carefully and keeping up-to-date on orders from the Governor, and we feel at this time we will be able to put on a top-notch tournament in a safe, public environment.”

Despite not winning on the PGA Tour, Dahmen has established a strong record in his four years as a full-time tour pro. He’s finished second twice, including a 2019 finish at the Wells Fargo Championship. He also has eight other top-10 finishes.

On Friday, Dahmen gave bettors another reason to back him. He fired a career-record 58 at Mesa (AZ) Country Club. The 32-year-old needed a birdie on the final hole for a 59, but made an eagle for the 58.

Cejka might also be a solid pick at 14/1. Cejka has played a few of the Outlaw Tour events and has won two of them. He will be going for his third consecutive victory. 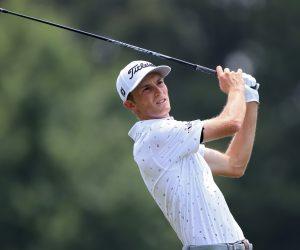