World No. 1 men’s tennis player Novak Djokovic announced Tuesday that both he and his wife tested positive for COVID-19 following his participation in the Adria Tennis Tour.

Djokovic helped organize the Adria Tour, which held events in Belgrade and Zadar, Croatia over the past two weeks.

The Zadar event halted before its final – which Djokovic reached – after Grigor Dimitrov tested positive for the novel coronavirus. That led most players in the event to take tests, with Borna Coric and Viktor Troicki also learning they had contracted COVID-19.

Djokovic was one of the few people who did not take a test in Croatia. He reported having no symptoms of the illness, and first traveled back to Serbia before seeking out testing.

“The moment we arrived in Belgrade we went to be tested. My result is positive, just as Jelena’s, while the results of our children are negative,” Djokovic wrote in a statement. “Everything we did in the past month, we did with a pure heart and sincere intentions. Our tournament meant to unite and share a message of solidarity and compassion throughout the region … we organized the tournament at the moment when the virus has weakened, believing that the conditions for hosting the Tour had been met.”

Many players on the ATP tour have criticized Djokovic and other organizers of the Adria Tour for holding the tournament without taking necessary precautions. Large audiences attended both events – albeit at 50% capacity at the Zadar tournament – and players socialized outside of their matches.

Few have been more critical than Nick Kyrgios. The Australian took to Twitter again on Tuesday to blast the Adria Tour.

Prayers up to all the players that have contracted Covid – 19. Don’t @ me for anything I’ve done that has been ‘irresponsible’ or classified as ‘stupidity’ – this takes the cake. https://t.co/lVligELgID

“Prayers up to all the players that have contracted COVID-19,” Kyrgios wrote, sharing a video of players dancing shirtless at what appears to be a nightclub. “Don’t @ me for anything I’ve done that has been ‘irresponsible’ or classified as ‘stupidity’ – this takes the cake.”

Djokovic made several comments and decisions during the pandemic that attracted controversy. In April, he said that he was against taking a COVID-19 vaccine, even if it’s required to continue playing on tour. He’s also questioned the strict protocols US Open organizers plan to implement this summer, saying that he isn’t sure he can play under “impossible” conditions.

Meanwhile, the ATP tour released a statement on Monday, saying that it’s continuing to adjust its safety protocols as it moves toward resuming the season on Aug. 14.

“The ATP wishes a complete and quick recovery for the ATP players and members of their staff who tested positive for COVID-19 following involvement in the Adria Tour exhibition tournament,” the statement read. “The ATP continues to urge strict adherence to responsible social distancing and health and safety guidelines to contain the spread of the virus.” 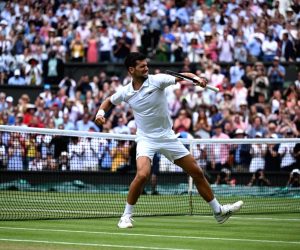