45 seconds ago
EXCLUSIVE: Made by Hagi To Follow His Footsteps. What Should Galatasaray Fans Expect From Cicâldău

Bates, a 6-foot-9 point-forward, is only 16 years old and still has two more years of high school remaining. ESPN ranked Bates as its #1 prospect for the incoming Class of 2022.

“It feels good to win the award,” said Bates in an ESPN interview. “I was really surprised when I got it. It showed me hard work is paying off.”

With the NBA rescinding the “One-and-Done” era and their requirements for entry in the annual NBA Draft, scouts expect Bates to become the first high school player to make a direct jump to the NBA. In 2005, the NBA prohibited high schoolers from joining the pro ranks and required one season of college basketball, or some other equivalent.

Of course, both Michigan and Michigan State would love for Bates to join them for a season of Big Ten basketball before his inevitable entry into the NBA. However, all signs point toward Bates bypassing college.

“If I can go straight to the NBA out of high school, it’s a go for me,” Bates said.

Bates could become the first high schooler to get drafted with the #1 pick since LeBron James (2003) and Dwight Howard (2004) were selected with the top pick in consecutive years.

Bates won the 2019 Michigan High School Player of the Year as a freshman. The super-frosh averaged 32.4 points and 9.1 rebounds for Lincoln High during the 2018-19 season. Lincoln went on to win the state championship.

In his sophomore season, Bates guided Lincoln to a 19-3 record. They were hoping to defend their state crown, but the coronavirus pandemic canceled the Michigan high school state tournament.

Just a month ago, Bates exploded for 63 points and hauled down 21 rebounds in a double-overtime victory for Lincoln over Chelsea.

In the 35-year history of Gatorade sponsoring the High School Player of the Year, a sophomore had never won the award. He edged out the top two recruits in the country, Cade Cunningham and Evan Mobley, both of whom are projected lottery picks.

Bates now has a chance to become the first three-time Gatorade HS POY winner. LeBron James, Brandon Knight, and Greg Oden won the Gatorade Player of the Year twice during their junior and senior seasons.

In last summer’s Nike Elite Youth Basketball League, Bates (only 15 at the time) dropped 43 points against Bronny James, the son of LeBron.

Bates joins Paige ‘Buckets’ Bueckers from Minnesota as the top high school basketball players in the country. The only difference is that Bueckers is headed to UConn next year to play college basketball, while Bates will be starting 11th grade.

Bueckers won the 2020 Gatorade Player of the Year in girls high school basketball in early March. Karl-Anthony Towns from the Minnesota Timberwolves surprised Bueckers at school to present the award.

In Bates’ case, he did not have a ceremony or special presentation due to the social distancing rules and stay-at-home orders during the coronavirus pandemic. Instead, Jayson Tatum (Boston Celtics) and ex-NBA star Dwyane Wade tweeted out the good news to Bates. Tatum won the prestigious award in 2016.

“He’s the real deal, has great size, plays hard,” said Tatum. “He can score from anywhere. He can shoot, dribble, create for himself. He’s got all the tools.”

Bates has drawn comparisons to both Penny Hardaway and Kevin Durant. He’s still growing and only turned 16 in January, so he could still add a couple of more inches to his 6-foot-9 height and freakish 7-foot-1 wingspan.

“I appreciate the people that support me,” said Bates. But I really try to keep a level head and stay humble. Still got a long way to go. I just try to stay humble and stay in the gym.” 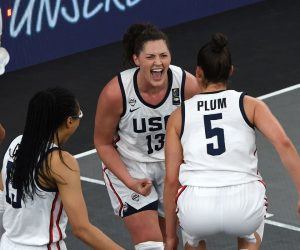