Lionel Messi took advantage of his short break at Paris Saint-Germain and flew to Barcelona to meet with some old friends.

Messi had dinner with current FC Barcelona manager Xavi and two important members of the Blaugrana first team, Sergio Busquets and Jordi Alba. Barca fans hoped it was more than an evening meal between old buds, but sources close to the Catalan club claim Messi’s return to the Camp Nou wasn’t even mentioned. The meeting between Messi and his friends was scheduled for a long time, with the group also celebrating Xavi’s birthday.

Messi was greeted by journalists after he ate in a Japanese restaurant, but refused to answer questions. He did take pictures and signed autographs for the supporters gathered outside, though, including on an FC Barcelona shirt.

A tough life at PSG

Messi has found it hard to adapt to the French Ligue 1. Since his move in August, he’s only scored once in 12 games. The seven-time Ballon d’Or winner did find the net more easily in the Champions League, where he scored five goals in five games. Wissam Ben Yedder from Monaco leads the scoring ranks in France with 13 goals to his name, followed by Lille’s Jonathan David (12).

Paris Saint-Germain’s Kylian Mbappe scored three goals fewer than Ben Yedder, but is the bookies’ favorite to finish the season Ligue 1’s top scorer. He is now at +150, with Yedder at +250 and David at +300. Messi, who topped the favorites list when he moved to PSG in August, is now at +8000. 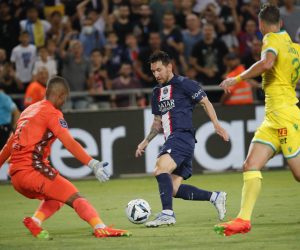 Messi, Neymar and Ramos on Target for Paris as PSG Lifts First Trophy of the Season