There is no official title for the chief ambassador of the PGA Tour’s three-tournament annual Asian swing, but Justin Thomas might wear the unofficial crown. The 25-year-old has won three events on the other side of the world, and is the defending champion at this week’s CJ Cup at Nine Bridges in Jeju, South Korea.

So it is no surprise that Thomas is the 5/1 favorite to win. But unlike last week, there are some other top golfers that will be joining Thomas.

One of them is three-time major championship winner Brooks Koepka. He is a 10/1 pick, and coming off arguably his best season as a professional. He captured both the US Open and the PGA Championship, as well as Player of the Year honors.

This will be his season debut after playing in the Ryder Cup, where he won 1.5 points in four matches. With three majors and only one regular tournament victory, Koepka is an anomaly on tour with more majors than regular tour wins. He would like to change that at Nine Bridges.

This is his first appearance here, though, and he and the other golfers will have the advantage of four guaranteed rounds, since there is no cut at this event.

The wind is what dictates how players will perform at Nine Bridges. Last year, the wind blew steadily for three of the four rounds, and can blow enough to affect balls on the greens. In the 2017 final round only three players shot in the 60s.

If the weather is mild, then this is a definite birdie fest. The fairways were the third easiest to hit of all the PGA Tour tournament courses, though the greens can be tricky to read for the first-time player. Thomas said there is a definite strategy to the greens.

“Yeah the greens have a lot of slope on them,” Thomas said. “The greens are very big as well, so the slope can play a big factor and a big role in how you are going to play the course. If you want to use some of the slopes to get close to the holes, or if you want use some to get into the spot where you want to putt from, but the hardest part is that you just have to play smart. You can’t be too aggressive and short sight yourself or have the putt above the hole. You want to try to leave it below the hole and have as many makeable putts with as little break as possible that you can out there.”

The memory of last year’s CJ Cup at Nine Bridges is still in Leishman’s mind. He finished tied with Thomas, but lost on the second playoff hole. His game now feels stronger to him last year when he lost to Thomas.

“I had a lot of birdie putts from eight foot and in, which is nice when you’re feeling good over the putter,” Leishman said. “Hoping I can continue that trend. “Hopefully, I can play well again and do one better than last year.” 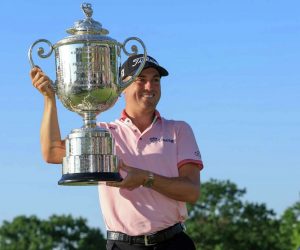