Monday’s MLB All Star Game Home Run Derby might be more noteworthy for who is not participating, rather than who will be competing. The top two leaders in home runs this season chose not to participate.

Milwaukee’s Christian Yelich, who leads the majors with 31 homers, had to pull out of the competition with a bad back. He was the favorite for the derby at 3/1. Pittsburgh’s Josh Bell is now the top pick at 3/1. He is followed by Vladimir Guerrero Jr. at 4/1.

Yelich did not play in Sunday’s game against Pittsburgh, but said he wants to participate in the All Star Game.

“I’d still like to try and play,” said Yelich, who was voted a starter for Tuesday’s game. “I think I’ll be able to. It’s just I didn’t think I was going to be able do that kind of volume of swings and what the derby demanded. If I wasn’t going to be able to perform how I was supposed to and do it justice and give it the effort that it deserved, I didn’t think it’d be a great idea to do it.”

The player with the second most home runs is Los Angeles Dodger Cody Bellinger. The 23-year-old said he wanted to relax, and with the All Star Game in Los Angeles next year, he didn’t want to be in it two straight years.

“It’s gonna be here in LA next year, so that’s gonna be a higher possibility,” Bellinger said. “I just wanted to go this year and enjoy the first day and enjoy it. In 2017, I remember getting to the field and going anxiously throughout the whole day. You have to hit extra batting practice to get ready for the derby with no cages. So I just wanted to go there and relax completely the first day. I’ll definitely consider it next year in Los Angeles.”

Bellinger competed in the contest two years ago, and defeated Colorado’s Charlie Blackmon in the first round. He then lost in the second round to eventual winner Aaron Judge. 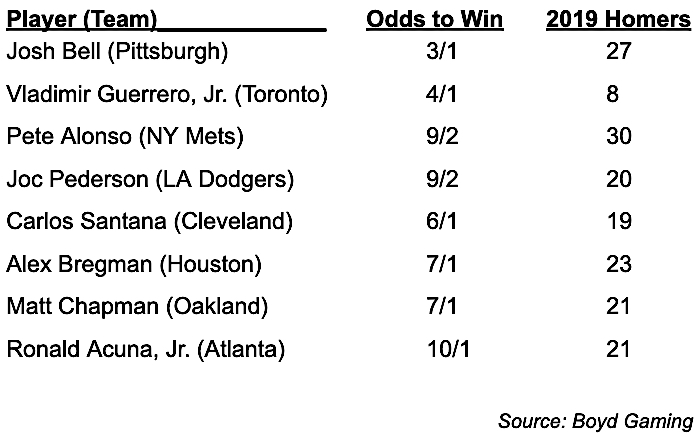 Yelich will be replaced by Oakland’s Matt Chapman, who at 8/1, has the lowest odds, other than Atlanta’s Ronald Acuna Jr., who is at 10/1. Chapman has hit 21 home runs on the season, good for 17th in the league.

He will be paired with Guerrero, who has only hit eight homers, but has played in 20 less games than the other participants. Chapman is the +110 underdog to advance, while Guerrero is -140.

New York Mets’ Pete Alonso might be a good longshot. He is at 9/2, and leads the league with home runs farther than 400 feet. He is facing Carlos Santana, and is the overwhelming favorite at -155. Cleveland’s Santana, who is at 6/1 to win, is at +125.

Houston’s Alex Bregman lost in the first round last year, and oddsmakers believe he will have another early exit. Bregman is at +110 in his first-round match with LA Dodgers’ Joc Pederson, who is at -140.

The biggest favorite to get out of the first round is Bell. He is -200 to defeat Acuna, who is at +160. Bell will have former roommate and teammate Jon Schwind pitching to him. Schwind told the Tribune-Review that he hopes he can help Bell win.

“He likes the ball a little up, kind of middle height, closer to middle, middle-in,” Schwind said. “He’s such a long guy that it just comes down to me repeating where the ball goes, and he’ll figure out what he has to do with it.”

AL MVP Odds: Can Anyone Stop Mike Trout from Winning His Fourth Trophy?