The turf maestro seeks his sixth victory in the Diana and his fifth consecutive trip to the winner’s circle. And Brown does this sending 5/2 Sistercharlie in search of her third consecutive Diana victory. Should the 6-year-old mare complete the three-peat, she’ll create her own Diana Stakes winner’s club. A club with a membership of one: her.

“That would be an amazing accomplishment,” Brown told the New York Racing Association.

Even With This Resume, Sistercharlie Isn’t the Favorite

But, this field is so deep, Sistercharlie isn’t your Diana favorite.

That would be Brown’s other horse: Rushing Fall (3/2). We last saw the five-time Grade 1 winner win that fifth Grade 1 in early July at Keeneland. There, Rushing Fall outkicked a game Jolie Olimpica in deep stretch to win the Jenny Wiley by less than a length. She too has a Breeders’ Cup title — the 2017 Juvenile Fillies Turf – along with Grade 1 wins at ages 2, 3, 4 and 5.

Rushing Fall also has a chip on her shoulder, losing to Sistercharlie in last year’s Diana despite rolling up a career-tying-best 103 Beyer Speed Figure. Rushing Fall clocked 103 Beyers in four of her last five races, including both her victories this year: the Grade 3 Beaugay at Belmont Park in June and the Jenny Wiley.

No Diana Stakes Brown-Fecta This Year

Alas, Brown must content himself sending out only two horses with a combined 12 Grade 1 victories – two of those Breeders’ Cups. That means he can’t repeat his Diana Brown-fecta from last year, when Sistercharlie, Rushing Fall, and Homerique went 1-2-3.

As good as Brown is in this event and on turf, he isn’t invincible. Saturday at Saratoga, Brown sent out four standouts in the Grade 1 Fourstardave, including 2019 Eclipse Award Champion Older Female Uni, the 2/1 favorite. All four missed the board, as Todd Pletcher’s 5/1 Halladay went gate-to-wire.

So, if you see chinks in Brown’s turf-colored armor, there are options, starting with Mean Mary (3/1). The Graham Motion trainee comes into the gate riding a four-race winning streak. Included in that are three graded stakes victories, the La Prevoyante and Orchid at Gulfstream Park, and the New York at Belmont.

After winning the 1 ½-mile Le Prevoyante and the 1 ¼-mile New York, Motion is curious to see how the 4-year-old handles the Diana’s distance cutback. He’s targeting Mean Mary for the Breeders’ Cup Filly and Mare Turf, run at 1 3/16 miles.

“She’s been pointing to this race for a long time,” Motion said. “With the Breeders’ Cup, I need to find out if she can handle these shorter distances. She certainly did before we started running her at these longer races, but not at this level.”

Starship Jubilee also comes into the Diana with a four-race winning streak, all of those stakes victories. The former claimer owns 18 victories from 36 starts. 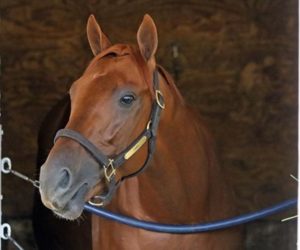