The Philadelphia 76ers Ben Simmons has been the favorite to win the NBA Rookie of the Year, but his competitors have been closing the gap at sportsbooks recently. The 21 year old is still the clear choice at -650 at one internet betting site, while he is a -225 at another.

But others are starting to close in on the 6-10 guard/forward. Donovan Mitchell of the Utah Jazz is the nearest challenger at +400. At Bovada he is listed at +170.

The race was quite different before the season began. Simmons was still the top choice with oddsmakers, who had him listed at 5/2. The next player was Los Angeles Lakers Lonzo Ball. The guard was the No. 2 pick by the Lakers and listed at 11/4. Mitchell was far down the list at 15-1.

Simmons started distancing himself from the pack and saw his odds go to 7/4 by October.

Simmons was the No. 1 pick by Philadelphia in the 2016 draft, but broke a bone in his ankle before the start of the season and missed the entire year. Since coming back, however, he has been dominate. He is averaging 16.6 points, 7.7 rebounds and 7.4 assists per game.

By December sportsbooks had all but guaranteed he would win the award. Bovada had him at 1/20 and the next closest was Ball at 13/4. It took a while for Philadelphia Coach Brett Brown told the Inquirer he was surprised at his development.

“I didn’t realize that he was going to be as gifted athletically, immediately,” he said. “I see it clearly now. You wished and you hoped, but you didn’t know. … Now, I know.”

The team is still a long way from challenging Cleveland for the Eastern Conference crown, but Simmons will be a big part of the team’s resurgence.

This year, though, he could be the top rookie even with his odds slipping. In December, he went down a bit to 1/12. Ball dropped off because of an injury and inconsistent play. Dennis Smith of Dallas was at 9/2 and De’Aaron Fox of Sacramento was at 10/1. Mitchell was still mired at 15/1.

Then the guard started to heat up. His scoring average went to 18.2 points per game and he was making 2.2 three-pointers ever game. In January Simmons dropped to 2/13, while Mitchell went to 4/1.

The All Star Game in February was Mitchell’s coming out party. He impressed in the Rising Stars Challenge and won the Slam Dunk Contest. Suddenly the rest of the league was seeing how special he was, not just the Jazz.

The sudden notoriety was a bit of a shock to the 21-year-old. The No. 13 pick in the 2017 draft talked about his success to reporters at the All Star Game.

“My plan was to make it to the NBA, but not after my second year of college,” Mitchell said. “I thought it would take a lot more time. I thought it would be a gradual — it’s been gradual — but everything that’s happening now is happening so fast. It’s so rapid. I wasn’t expecting this to happen, like, right now.”

He has become Utah’s primary offensive weapon now and has upped his scoring to 19.6 points per game. He has also made the NBA Rookie of the Year award a two-player race. 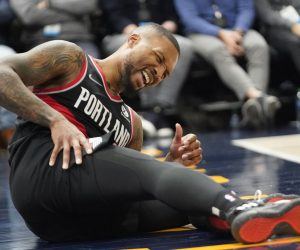