Novice horseplayers learn early on that when it comes to betting the ponies there are no real certainties. But now, Winx the incredible Australian race mare is displaying that when she sets foot on the turf, perhaps, she’s a sure winner after all.

This week, in the most recent in a series of late Friday night performances in the US – Saturday afternoon in Australia – the horse that refuses to lose made it look easy at Rosehill Garden, romping across the finish line at 1/17 odds, an easy 3 1/2 length winner in the Group 1 George Ryder Stakes. The win marks her 32nd consecutive victory and adds to her world record 24 Group 1 wins.

“She did what she does best and put them all to the sword. There’s not a lot more you can say — she’s just out of this world.”

Trained by Chris Waller and ridden by Hugh Bowman, Winx has not tasted defeat since April of 2015. She’s the first horse in the storied history of Australian racing to win four Cox Plates, four Chipping Norton Stakes, and four George Ryder Stakes.

The 2019 George Ryder victory gave race fans more of the same thing they’ve been enjoying for several years. The win, doing nothing to pierce Winx’s aura of invincibility on the racetrack. Bowman kept her wide through the 1500 meter event on the grass.

Yet despite clearly covering more ground than any of her seven rivals, she gobbled up all the necessary real estate to storm home, in the end, a facile winner.

Although not officially confirmed, the George Ryder is the lead up to what’s expected to be Winx’s final race. That’s the Queen Elizabeth Stakes, on April 12 at Royal Randwick, as with Rosehill Gardens, in suburban Sydney.

The ownership group says no decision has been made on a potential breeding shed match for their daughter of Street Cry.

However, racing pundits might be wondering if the sport’s breeding model through which a mare’s owners pay a stud fee to breed to a top stallion could be reversed in the case of Winx.

What might the owners of top, blue-blooded Kentucky stallions such as War Front, Tapit or Triple Crown winners American Pharoah (2015) and Justify (2018) be offering to breed to Winx and share in ownership of a foal that would be racing royalty? 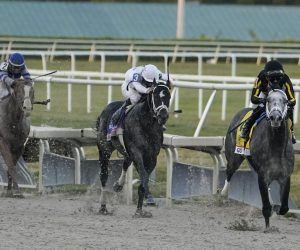