McKinzie, Thunder Snow, Vino Rosso and Yoshida are all Grade 1 winners. But, the top four will have to deal with four other emerging runners in the 92nd running of this race. It will be broadcast nationwide on NBC from 5-6 pm ET. It’s also is a “Win and You’re In” qualifier for the Breeders’ Cup Classic on November 2 at Santa Anita Park.

“Win and You’re In” means, in addition to the biggest slice of the purse, the winner’s connections receive a free ride to the Breeders’ Cup Classic. That includes all entry fees and transportation. In that race, the victor will face some of his younger brethren for the first time. That could include Maximum Security, Game Winner and the rest of this year’s three-year-old class, still in competition.

McKinzie is from the barn of Triple Crown winning trainer Bob Baffert. Fans and bettors know his recent runner-up finish to Mitole in the 1 mile, Metropolitan Handicap downstate on Belmont Day, June 8, could have easily been a win. Mike Smith, always at his best in big-money races, has the mount.

Baffert knows his horse will need improved racing luck in the Whitney:

“We’re excited and really looking forward to running in this race. He’s trained forwardly since the Met Mile and he’s come out of that race really well. It’s unfortunate we didn’t get the trip we really wanted there, but now going a mile and eighth hopefully will give him a little more time to work out a better trip. It looks like a very good competitive field, so we’re hoping we can run our race and get a little bit of racing luck as well.”

Thunder Snow, third in the Met Mile, is the richest thoroughbred in training with $16,511,476 in purse earnings. He’s the second choice at 3/1 in the projected morning line. He’s never won in North America, having amassed his massive bankroll in Dubai and Europe.  His previous US starts include a troubled effort in the 2017 Kentucky Derby at Churchill Downs. That’s where he incredibly balked at the start, never really contesting the race.

Christophe Soumillon flies in from Europe to scale the 5-year-old son of Helmet from post 4.

Rounding out the big four are Vino Rosso and Yoshida. Vino Rosso hales from the barn of Todd Pletcher. He’s the winner last out of the Gold Cup at Santa Anita. Hall of Famer John Velazquez retains the mount on Vino Rosso from post 5 at probable 6/1 odds.

Yoshida is a Bill Mott pupil. The versatile Japanese-bred son of Heart’s Cry  is a top-class winner on both dirt and turf. Red hot Jose Ortiz, in search of his first Whitney win, leaves from post 7 at projected odds of 10/1.

‘Queen of Saratoga’ to be Honored

The race is laden with extra significance this year because of the recent passing of Marylou Whitney, 93, the highly influential owner/breeder. The “Queen of Saratoga” is credited with helping restore the significance of Upstate New York plant, one of the nation’s oldest tracks still in operation. Her personal style and pure love of the sport, in addition to her significant philanthropic efforts are legendary in the Saratoga Springs region. The race is named for the Whitney family, long-time supporters of the sport.

Fans will celebrate “Marylou Whitney Day” Saturday in conjunction with the race that honors her family.

Whitney was awarded the Eclipse Award of Merit in 2010, one of the Thoroughbred industry’s highest honors. She’ll be long remembered for her influence in the Saratoga Springs community

Click here for for this year’s complete Whitney field and connections. 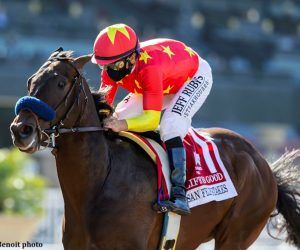 Kentucky Derby Futures: When is it Too Late to Jump In?