Betting and Gambling with the US Open 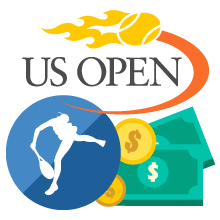 It's important that if you're an avid fan of the US Open or just tennis in general, that you know where the best places are where you can safely and quickly place bets on specific players, outcomes or points. With these online gambling sites that we have listed below, you'll be able to find the best site for US Open tennis betting. Online gambling sites like these allow users to come round, sign up and start betting.

The reason for this is that most of them offer some really great deposit options. You'll be able to make a snap decision based off a gut-feeling or a calculated guess, and then place your bet within seconds after creating your account. How do we know these are the best online gambling sites? We've played at them ourselves, we've used our own money and we've won money on some of the outcomes. Sites such as will offer any bettor looking to put a wager on the US Open, a number of perks.

The sites listed here will offer:

In 1975 the US Open changed locations and the tournament was played on a clay court. Shortly after, in 1978, the tournament moved to its current location and is now played on a hard court known as DecoTurf. DecoTurf has less friction and produces lower bounces than other hard courts. This creates a faster paced game that suits a serve-and-volley style player.

Some of the recent winners of the US Open include:

A History of the US Open

The US Open is one of the oldest tennis tournaments in the Grand Slam. The tournament is currently held in Flushing Meadows-Corona Park in Queens, NYC at the USTA Billie Jean King National Tennis Center. It takes place in late August through early September. It's the final tournament of Grand Slam tennis and is the only Grand Slam tournament that has final-set tiebreaks.

The first game was held in 1881. It was originally played on a grass court as an exclusive tournament to entertain high society. In the beginning, the men's and women's games were separate with the Mixed Doubles held alongside the women's games. In 1969, all of the tournaments were combined into one and the current format of the US Open was realized. 1969 was also the inaugural year of the open era in tennis that allowed professionals to compete in the major tournaments.

Richard Sears, Bill Larned and Bill Tilden all hold the most titles each with seven wins for the Men's Singles. Jimmy Connors, Pete Sampras and Roger Federer come in second with 5 wins each. Molla Bjurstedt Mallory holds the title for most Women's singles with eight wins. Chris Evert comes in second with six wins.

The Grand Slam tournaments are big events for tennis bettors and online sportsbooks. Fans like to put down money on the games to add an extra element of excitement.

If you plan on putting down some money on the US Open, it's important to keep the court surface in mind. It's a hard court that results in a faster paced game. This type generally suits all playing styles, but the US Open has been known to be kind to players with a fast, serve-and-volley style such as Pete Sampras. While the serve-and-volley style isn't as common as it once was, there are still a few players that use it from time to time. Do a little research to find out which players prefer a faster, hard-hitting style of game. These players will more than likely do the best at the US Open.

If you'd like to learn more about online gambling and odds and betting, check out our explanation of sports betting. Or, check out our odds conversion calculator to display tennis odds in American, European or decimal formats. If you'd like to get more tips for betting on tennis or other Grand Slam tournaments, visit our tennis, Australian Open, French Open or Wimbledon pages.

Once you're ready, visit one of our recommended sportsbooks to put down a few dollars on your favorite.