Betting Online with the French Open in 2020 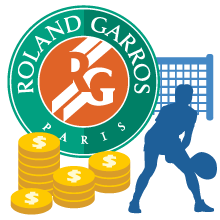 Tennis can be one of the most popular sports to watch not only live but on TV as well. This is purely because it's such an action-packed sport, have some amazing feats of strength and is the ultimate 1 on 1 battle royale. It's no surprise that gambling on tennis is popular too, but more specifically, betting on the French Open at online gambling sites.

There is nothing better than watching your winning horse come in, so why not do the same thing with a sport like tennis? For the most part, you only have one player to back and most of the factors are out of your control. There is very little luck involved and being someone who enjoys and watches tennis, will give you a leg up on most of the other bettors. The only thing left to do then is to find yourself a reputable online gambling site like which will take care of your personal information and ensure that you can place top bets every time.

On our site, we offer bettors the chance to:

History of the French Open

The French Open is a prestigious tennis tournament that is one of four tournaments that comprise the Grand Slam tournaments. It is held in mid-May through early June and follows the Australian Open. It takes place in Paris at the Stade de Roland Carros. The French Open (also known as Les Internationaux de France de Roland Garros, Tournoi de Roland-Garros or simply as Roland Garros) began as a national tournament in 1891. The first women's game was held in 1897. In 1925, it was opened to international players and was the first Grand Slam tournament to enter the open era of tennis, allowing amateurs and professionals to compete.

The French Open is the only Grand Slam tournament that is played on a clay court. Clay courts affect the bounce of the ball and slow down serves. For this reason, players who have dominated grass or hardcourts with strong serve-and-volley games have a hard time adjusting to the slower game that the clay court creates. This includes Pete Sampras and Roger Federer who have never won the French Open. However, players such as Bjorn Borg and Rafael Nadal who are more suited to the slower pace have been much more successful in this event. In fact, Rafael Nadal has dominated this event in recent years although his relentless dominance has been curtailed in the last couple of years.

Nadal is the record holder when it comes to total number of wins though, as he has nine titles to his name. He is followed by Frenchman Max Decugis and then Bjorn Borg. In the women’s competition, Chris Evert is the most successful player of all time, closely followed by Suzanne Lenglen – the player whom the tournament’s trophy is named after. Unlike other Grand Slams, Serena Williams hasn’t dominated at Roland Garros, only winning the tournament three times.

How to Bet on the French Open

If you want to put down some money on the French Open at an online gambling site, there are tips that you can use to help maximize your wins. As always, it is important to be familiar with the players. It's good to know what kind of game they play because, as mentioned above, players that depend on strong serves to win games don't do as well at the French Open. Keep this in mind before putting down money on big names that dominate other court surfaces.

If you'd like to know more about tennis betting and online gambling, check out our Tennis page or our US Open, Australian Open and Wimbledon pages.

We also offer an odds conversion calculator to display all the odds in American, European or decimal format. Once you're ready to make a bet, visit one of our recommended sportsbooks.

Whenever the French Open comes around, you can be sure of one thing: the different online sportsbooks are going to start offering some great offers. The reason for this is simple: they know that loads of people will want to bet on the tournament, therefore they offer bonuses to attract new players to their sites. Regardless of the reason though, this is great news for gamblers, who will get more for their money.

But how do you find these great bonuses? Well, you could trawl through all of the different online sportsbooks yourself, however this is going to take absolutely ages. So, instead, why not let us do the work for you? We’ll bring you all of the best French Open bonuses, so you can be sure that you’re always getting the best deal when you bet on this huge tennis tournament.