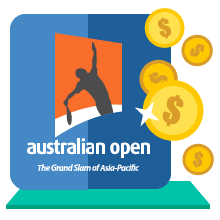 The Australian Open starts off the tennis season and is the first of the four Grand Slam tournaments. Since it takes place in late December through early January it's sometimes criticized by players because it's so close to the Christmas and New Year's holidays. Because of this timing, many new or unknown players perform well, making upsets a common occurrence at the Australian Open. This has been especially true for the last couple of years.

The tournament is held in Melbourne at the Rod Laver Arena and Hisense Arena in Melbourne Park. Both arenas feature retractable roofs so that play can continue despite of rain or extreme temperatures. It is one of only two Grand Slam tournaments with indoor play. Wimbledon is the other. No matter what tournament it is, you can still bet on any of them. It's best to make sure that the online gambling site you are betting on is completely safe and secure though. We suggest you use one like as it always serves us well.

History of the Tournament

The first Australian Open was held in 1905 on a grass court. In its early years, the Australian Open was not popular among foreign players mainly because travel to Australia was time consuming and difficult (In 1920 a trip to Australia from Europe by boat took 45 days). Add to this the small tournament purse and players were not anxious to make the effort to get to the tournament. Despite entering the open era of tennis in 1969, it wasn't until 1983 that big names began to compete regularly at the Australian Open. It has since become one of the most popular tournaments in tennis.

In 1988, the tournament changed from a grass court to a hard court known as the Rebound Ace. Hard courts are unique in that increasing or decreasing the amount of sand on the top paint can adjust the friction on the surface of the court. This customizes the bounce of the ball and speed of play. Hard courts are much faster than clay courts, yet not quite as fast as grass. Generally, they are considered to be the most equal for all playing types.

Some players complained that the Rebound Ace court got too sticky in the intense heat of the Australian summer, making it difficult to move on and increasing the chances of injury. This claim was dismissed when officials conducted an investigation into the matter and found that the heat had no real effect on the court. Nevertheless, in 2008, the Rebound Ace surface was replaced by a medium-paced acrylic surface called Plexicushion Prestige. This switch generated some controversy as many people complained that the new surface was too similar to that used in the US Open.

One of the main things to consider before placing a bet at an online gambling site on any of the Grand Slam tournaments is the court. As the court at the Australian Open is still relatively new, the players have noted that it is much slower than other hard courts. Since slower courts suit baseline players that like to slug the ball back and forth in a slower paced game, it would be wise to choose a player with this style of playing. Of course, as the court gets broken in, it could get faster. In this case, a player with a fast, hard-hitting game might fair better.

Check out our tennis page for more tips on tennis betting. Or for more information on Grand Slam tennis, check out our US Open, French Open or Wimbledon pages. Once you're ready to take a punt at your favorite player, check out one of our recommended sportsbooks.

The Australian Open gains worldwide attention, not only from fans of the sport, but also from online gambling players, who are eager to have a bet on the tournament. Because the Australian Open is so popular, many online sportsbooks offer bonuses to players betting on the competition, such as enhanced odds on certain outcomes. Due to these many bonuses, any savvy online gambler should check through the different bonuses before making their bet. Alternatively, they could just look here though, as we'll bring news of all the best Australian Open bonuses as soon as we hear about them.