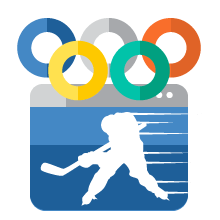 Men's ice hockey has been a staple of the winter Olympics since 1924. In the early days, the sport was largely dominated by Canada who won six of seven gold medals in the first three decades. During this time, Czechoslovakia, Sweden and the US were also major medal contenders.

In 1956, the Soviet Union entered a team and quickly took over Canada's role as the lead force in Olympic hockey, winning seven of nine tournaments they competed in. In 1980 the US team upset the heavily favored Soviets and moved on to capture the gold medal. This game is known as the Miracle on Iceand is one of the most memorable Olympic moments. The International Ice Hockey Federation (IIHF) voted the Miracle on Iceas the best international hockey story in the last 100 years.

It's easy to see why betting on olympic hockey is so easy, especially in online gambling circles. All you need to do is find the top online gambling sites that offer some kind of sports betting, and there's a good chance that olympic hockey betting will be there. One such example that we like to use is as it offers hockey bettors everything they could need from betting guides and tips to hints on where to get the best bonuses.

Other teams that have won the gold medal are Great Britain, Sweden and the Czech Republic.

Hockey at its Finest

Women's ice hockey was added to the winter Olympics in 1998. Canada and the US have dominated this event since its inclusion. The US took the gold medal in 1998 and Canada took it in 2002 and 2006. Finland and Sweden have also developed competitive women's teams and both countries have taken silver and bronze medals in the event.

Prior to 1998, professional players were not allowed to compete in the winter Olympics. After some deliberation, Olympic officials decided to open the competition to all players professional and amateur. The NHL, on the other hand, was hesitant to allow players to compete because it meant their regular season would come to a halt as players left to compete at the international level. In the end, all parties came to an agreement and NHL players are now allowed to play for their country of citizenship during the winter Olympics.

Originally the tournament was held as a round-robin series of games and ended with a medal round. Teams were awarded medals based on the amount of points they had accumulated during the round. This changed in 1988 when the tournament took on a format similar to the NHL playoffs. 12 men's teams break up into divisions and play a preliminary and qualifying round. The top eight teams will advance to the playoff round in which the winning team will receive the gold medal. Women's Olympic hockey is played in the same way, but since the women start with eight teams they skip the qualifying round and go straight to the playoffs.

The Olympics are a big deal for bettors and online sportsbooks. They offer several events for people to bet on and ice hockey is one of the most popular. But before you throw down your money there are a couple of things to keep in mind when betting on Olympic ice hockey. Mainly, the rules of the game are different from NHL games. Olympic ice hockey uses the IIHF rules, which means that