As a major event in the golfing calendar, US Open online gambling is a massive draw for internet betting fans. Sports betting sites will offer you good odds on a range of fixtures, as you follow individual players' progress as the tournament goes on. Gambling online with US Open bets is available at almost all of the top online gambling and sport betting venues on the internet.

Here you'll find our review team's shortlist of the very best sites offering online gambling US Open bets can be made at. All offer great odds and a good range of betting opportunities, a variety of other sports to bet on, as well as a comprehensive selection of payment options at the cashier to set you up for real cash wagering. If you'd like to jump straight to our top site for US Open online gambling then take a look at .

Any shortlisted site offering online gambling on the US Open will offer you: 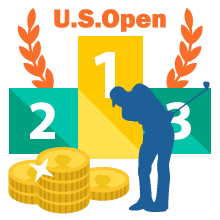 Always a favorite for online gambling the US Open (officially known as the United States Open Championship) is the second major championship on the PGA Tour calendar. The USGA stages the event every year in mid-June so that the final day of play is held on Father's Day. Also on the official European Tour schedule, the US Open became an official money event tournament on the Asian Tour in 2008.

This championship is quite unlike The Masters, in that the location of the tournament changes every year. At no point in the history of the US Open has a selected golf course held consecutive US Opens, however there are a handful of the most famous courses that have hosted the event on more than one occasion.

Pebble Beach is one such location, and it has been home to the US Open on more than one occasion in recent decades. In 2010, Pebble Beach Golf Links hosted the US Open for the fifth time in its history, with the first coming in 1972. The most recent Pebble Beach victor and, consequently, the US Open winner was Northern Ireland's Graeme McDowell.

You can follow and bet on the top players in the US Open when gambling online, and there have been a few. As you would expect, the US Open has been dominated by champions from the United States for more than a century. However, prior to 1911, the first 16 US Open winners were either from Scotland, England, or Jersey. After a decade and a half, the United States began to produce their own crop of home-grown professionals, and since 1911, an American has won the US Open 83 times.

In recent years the US Open has been won by some of the biggest names in the world of golf. Rory McIlroy has been victorious on two occasions, while Jordan Spieth has also claimed the crown. Other famous names to have taken glory at this tournament include Tiger Woods (three wins), Arnold Palmer and Jack Nicklaus (four wins). Players from the USA have won the previous two tournaments, however American players have only been victorious in half of the last ten US Opens.

The following is a list of US Open winners from the past two decades:

Betting on the US Open Golf

US Open online gambling attracts bets from golf enthusiasts and amateurs alike, such is its appeal to a wide range of gamblers. All good online sportsbooks will have a range of bets open for every tournament, however most simply choose to attempt to pick the winner. The US Open is known for producing a few surprising results over the years though, so choosing which man will come out victorious is often an incredibly tough job. To minimise the risk, many gamblers instead choose to predict if a player will finish in the top four or five of the competition instead.

You’ll also find a raft of other types of US Open bets when visiting a good online sportsbook though. If you would like to learn more about how to bet on this exciting sport, why not take a look through our golf gambling guide?

Every online gambler likes a bonus, as they can increase winning amounts or provide extra cash to bet with. When the US Open rolls around, many online sportsbooks will start some fantastic bonuses, as they look to woo potential players to their sites. The result? Those betting with US Open online gambling can often find some fantastic opportunities. You won’t miss any great bonuses though, as we’ll let you know about them as soon as we can. So, you’ll always be able to play at the best online sportsbook when gambling on the US Open.