Betting on the UEFA League 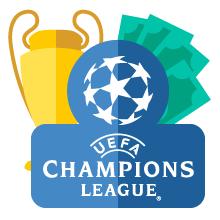 The UEFA Champions League and UEFA Europa League (formerly the UEFA Cup) are the two most prestigious club football championships in the world. The Champions League is often considered the most important trophy on offer at club level, exceeding the FIFA Club World Cup, and even standard league premierships. The most successful clubs from around Europe compete against one another every season for the chance to take home a European title.

It should come as no surprise then that UEFA League online gambling is quite a thing too. People from all over the world love to experience the champions cup whether they are watching the Champions League or the Europa League, there is still plenty of space to place a couple of bets, especially later on in the competition. As a bettor then, you need to ensure that you give yourself the best opportunity to make and place bets as well as win real money on all the bets that you place. is one such site and offers loads of security and plenty of options when withdrawing your winnings or even getting the best odds. With any online gambling site though, you should expect:

The UEFA Champions League is, much like the World Cup, one of the most watched sporting events on television and the web. It is broadcast across the world, and the most recent final managed to attract over 200 million viewers. In terms of online gambling, UEFA League betting is just as huge amongst web sports betting fans.

The competition was founded in 1955 as a two-legged knockout tournament, but, since the 1992-93 season, it has included both a group and knockout stage. The addition of the group stage has allowed for more clubs, in less prominent leagues, to compete in the tournament. Although the qualification structure continues to change, as it stands, only 32 European clubs each season qualify to contest the UEFA Champions League.

UEFA League online gambling allows sports betting fans to wager on the big players and the big teams that they like to follow on the pitch. Spanish powerhouse Real Madrid is the most successful club in the tournament's history, winning nine Champions League titles. Barcelona is the current champion, beating Manchester United in 2009 for their third victory in the tournament final.

The UEFA Champions League is one of the lengthiest annual club tournaments in Europe, beginning with qualifying rounds in mid-July (over a month before regular league seasons begin), and concluding at the end of May. Because of this, many clubs tend to have hectic travelling schedules throughout Europe all season. In 2008-09, Manchester United competed in the Barclays Premier League (1st), Carling Cup (Won), Community Shield (Won), FIFA Club World Cup (Won), UEFA Super Cup (Runners-up), and the UEFA Champions League (Runners-up).

The sheer number of games some clubs have to compete in often leads managers to weigh up which tournaments are most important. Ordinarily, it is the European tournaments that take precedence over everything else. At any top sports betting site offering gambling online, UEFA League fixtures are easy to follow and dip into for betting.

The Europa League is also an annual football tournament organized by the Union of European Football Associations (UEFA). It is not as significant as the Champions League, but its new format, implemented in 2009, allows for 48 European clubs to compete in the group stage of the tournament. This offers many UFEA League online gambling opportunities, and the with such a wide variety of larger and smaller teams qualifying, there is almost every type of bet available for gambling online.

The final club to claim the UEFA Cup (before it became the UEFA Europa League) was Ukranian Premier League runners-up, Shakhtar Donetsk, who defeated German squad Werder Bremen. Since the tournament has a different qualification format, smaller European clubs are able to compete and, ultimately, win the cup. The UEFA Cup has had an extremely diverse array of winners over the years. Clubs from Sweden, Belgium, Turkey, and Russia have all been crowned champions of the tournament, and because of this a winner has become much harder to predict.

Unlike the Champions League, only three football clubs have ever won the UEFA Cup more than twice. The UEFA Europa League promises to continue, and even increase, this diversity in the competition. Eight more clubs will be competing in the newly formatted tournament including national cup winners from Liechtenstein, Andorra, and San Marino. Additionally, when the group stage is complete and 24 teams continue to Round Two, they will be joined by the eight teams who finished third in their respective UEFA Champions League group.

Making Bets on the Competitions

Now you know a little more about the league, you can explore the range of real cash UEFA League online gambling available. Sportsbetting sites compete to offer you the best odds and betting opportunities online, so it's a good idea to shop around for the right site for you. The recommendations shortlisted here all offer excellent internet venues with which to get gambling online with UEFA League bets. They can offer you a good bonus to set up your wagering, and a great range of other real money sports betting opportunities.

When looking at online gambling on either the UEFA Champions League or the UEFA Europa League, both can be seen as lucrative betting opportunities. You can place bets on outright winners, bet by a certain amount of goals, even place punts on goal scorers or score margins. There is so much to do at any of the respective online gambling sites that we list, you will find that you run out of money to bet far before you run out of options to bet on.

People will often take long shot bets in online gambling on such big competitions too. These are the ones where most people can win huge amounts by betting on the underdogs. Cup competitions are far too often completely different from league competitions which explains why some really small teams often take the less prestigious cups in the Premier League as well.