Washington Wizards star Bradley Beal suffered a hamstring injury over the weekend and the team might shut him down for the remainder of the regular season to rest up for the play-in tournament. Meanwhile, Beal had been in a fight with Steph Curry for the NBA scoring title, which is now in jeopardy if Beal misses the final four games of the season.

Beal underwent an MRI on Sunday to gauge the severity of the injury. The Wizards got some good news when it turned out not to be a severe injury, but it still makes sense to shut down Beal for the final four games. He will definitely miss Monday’s game against the Atlanta Hawks.

Beal underwent MRI today that ruled out significant injury to the hamstring, sources said. But he is ruled out Monday vs. Atlanta and his status is uncertain for the remaining regular season games Wednesday, Friday and Sunday. https://t.co/nCQtnwBwpX

The Wizards are one of the hottest teams in the NBA since early April with a 15-4 run. They passed the Indiana Pacers to take over the #9 spot in the Eastern Conference playoffs after winning two huge games. Last week, the two played a 295-point shootout in which the Wizards won by 13 points during Russell Westbrook’s historic triple-double (20 rebounds and 20 assists). On Saturday, the Wizards picked off the Pacers in an overtime thriller 133-132.

The Pacers trail the Wizards by just a half-point, but have five games remaining versus four for the Pacers. The Wizards are only one game behind the Charlotte Hornets, who currently occupy the #8 seed.

The Wizards have four games remaining on the schedule. They’re in Atlanta at the start of this week for two games (in three days) against the Hawks. In the final weekend of the regular season, the Wizards return home to Washington DC to host the slumping Cleveland Cavs and Charlotte Hornets. If the Wizards continue their winning ways and the Hornets continue to stumble, that final game of the season could propel them into the #8 seed. The #8 spot is important because they’ll only require one victory to lock up a postseason berth versus two wins in the play-in tournament if they’re in the Nine-Ten Game.

For most of this season, Beal led the NBA in scoring. In the second half of the season, Curry caught fire during the Warriors’ push toward a playoff berth in the Western Conference. During Curry’s sensational run, he seized the NBA scoring lead over Beal.

Over the weekend, Beal exploded for 50 points against the Pacers, but he tweaked his hamstring in the fourth quarter. Due to the injury, Beal missed the overtime session. On the same night, Curry lit up the OKC Thunder for 49 points.

Beal (31.4 ppg) trails Curry (31.9 ppg) by only a half-point in the scoring department, but if he misses the rest of the regular season, then Curry should lock it up.

Beal has never won an NBA scoring title, whereas Curry won it just once during the 2015-16 season when he averaged 30.1 ppg.

Regardless of who wins the title between Curry or Beal, they will deny James Harden a fourth-straight scoring title. 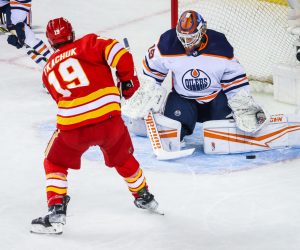 Oilers, Flames Back on the Ice After 15-Goal Outburst in Game 1