The UFC is forging ahead with its card in Brazil this Saturday despite concerns over the coronavirus pandemic. UFC Fight Night 170 will take place as scheduled in Brasilia, but without an audience.

The card features a main event between lightweight contenders Kevin Lee and Charles Oliveira, both of whom may have the talent to break into title contention in the near future.

Brazil Bars Audience Due to Coronavirus

Governor Ibaneis Rocha suspended all large gatherings in Brasilia due to concerns over the coronavirus outbreak. As a result, fighters will compete in an empty arena to keep the number of people inside to a minimum.

“We will just have the staff that’s running the event inside the arena that night,” UFC president Dana White told ESPN.

Naturally, both fighters in the main event remain more focused on their upcoming fight than the pandemic forcing them to compete under unusual circumstances.

Lee (18-5) holds the No. 8 position in the UFC’s lightweight rankings following a November win over Gregor Gillespie. That turned around two high-profile losses to Al Iaquinta and Rafael dos Anjos. He’s had previous success in the lightweight division, losing to Tony Ferguson in an interim title fight back in 2017.

Now, Lee gets the chance to prove himself again against a ranked contender and, perhaps, get another shot to move up the stacked lightweight ladder. While he might not be able to do that in front of a crowd of screaming fans, he said on social media that he’s okay with the arrangements made by the UFC.

“I’m good with fight in an empty arena,” Lee wrote on Twitter. “Let’s not panic too crazy, let us fight, entertain the people stuck at home.”

Lee came in overweight at the weigh-in, tipping the scales at 158.5 pounds. While Brazilian regulators allowed the fight to continue, Lee will forfeit 20% of his purse to Oliveira for missing weight.

Oliveira (28-8) comes into the bout on a six-fight winning streak that has seen him rise to No. 13 in the UFC lightweight rankings. While he once had a reputation as a fighter who crumbled under pressure, his recent win streak has rid him of that reputation.

Now, the 30-year-old says he’s never been better and is ready to break into the lightweight elite with a win at UFC Fight Night 170.

“I feel blessed. I’m on a six-fight winning streak – four submissions and two knockouts,” Oliveira told MMA Junkie. “I’m in an amazing phase … you’ll see a completely different Charles, much better than it my recent wins. This kid from the favela will keep on winning.”

Both men bring powerful striking games to the table, though Oliveira has more weapons: he’s the better grappler, and probably has the bigger gas tank as well, which could be a factor in the later rounds. Lee has shown an explosive ability to end fights, and that might give him the edge in Brasilia. FanDuel Sportsbook has made Lee the -146 favorite over Oliveira (+124). 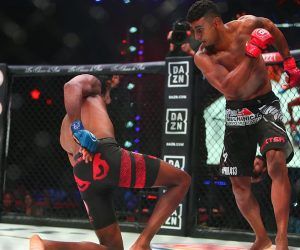