In yet another arbitrary rule change by the Big Ten, and further eschewing players’ long-term health and safety, officials rolled back the conference’s 21-day mandatory sit-out policy for players who’ve tested positive for COVID-19.

Players are now only required to miss a minimum of 17 days after testing positive. This consequently will make many more players eligible to compete in the College Football Playoff semifinal between No. 3 Ohio State and No. 2 Clemson at the Sugar Bowl in New Orleans on Jan. 1.

Clemson opened as 6.5-point favorites in the matchup.

Ohio State advanced as one of four teams selected for the playoffs after handily beating Northwestern in the Big Ten championship Saturday. The Buckeyes went without 22 players Saturday in accordance with current COVID-19 protocols.

The Big Ten’s medical subcommittee approved the changes last Wednesday, and the new protocol goes into effect on Monday.

Even with the shorter time off the field, conference officials say players who test positive for COVID-19 must still go through extensive cardiac testing, including a cardiac MRI, and receive clearance from team physicians before they can return to competition “any earlier than the 17th calendar day” after testing positive.

Cardiac screening for players includes “labs/biomarkers, ECG, echocardiogram, and a cardiac MRI,” according to a document released by the Big Ten.

The conference has been aware that players could potentially suffer both short- and long-term cardiac side effects from the virus for months. In September, before the start of the Big Ten’s truncated season, alarming data laid bare what Big Ten Commissioner Kevin Warren cited as “too much medical uncertainty and too many unknown health risks”  as his reason for postponing the conference’s fall sports season.

During a State College Area school board of directors meeting on Monday night, Penn State’s director of athletic medicine Wayne Sebastianelli made some early connections between COVID-19 and myocarditis. Sebastianelli said that cardiac MRI scans revealed that approximately one-third of the Big Ten athletes who tested positive for COVID-19 appear to have myocarditis, an inflammation of the heart muscle that can be fatal.

“We really just don’t know what to do with it right now,” Sebastianelli said.

While the long-term side effects of the virus on an individual’s heart health are still unknown, there have been several incidents this season of myocarditis sidelining or even hospitalizing college athletes.

Long-Term Prognosis for Players with Myocarditis Yet to be Defined

Earlier this month, Miami defensive back Al Blades Jr. was advised to sit out the remainder of the season after being diagnosed with myocarditis following his bout with COVID-19. And last week, Florida Gators’ star forward Keyontae Johnson was hospitalized after collapsing on the court following a time out during a game against Florida State. Johnson, who had COVID-19 earlier this fall, released this message from the hospital:

Even with the protocol rollbacks, the prospect of putting players further at-risk was too much for some bowl-eligible Big Ten programs, as Minnesota, Nebraska, and Michigan St. all declined bowl bids on Sunday.

No. 11 Indiana (6-1) were snubbed out of a New Year’s Six Bowl on Sunday, and are set to face 4-5 Ole Miss in the Outback Bowl on Jan. 2 at Raymond James Stadium in Tampa. Indiana opened as 7.5-point favorites.

The Hoosiers haven’t played in two weeks due to COVID-19, but head coach Tom Allen said last week they plan to return to finish their season in Florida.

Ohio State will play on New Year’s Day, although it is still unclear how many players will be given the green light to go against the Tigers, even with the new rules in place. Players affected by COVID-19 include the Buckeyes’ top receiver Chris Olave and their second-leading tackler, Baron Browning.

Under conference rules, the team doesn’t have to specify why players miss games, although starting punter Drue Chrisman confirmed on Twitter last week that he tested positive for COVID-19.

Several sources told ESPN, off the record, that positive COVID-19 tests among Buckeyes players and staff have risen over the past week. 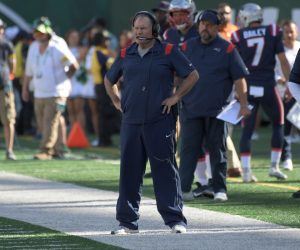