Liverpool will start the 2020-21 English Premier League season as the reigning champion, but oddsmakers don’t see the club as the favorite to win a second consecutive title.

The Premier League released its 2020-21 schedule on Thursday, unveiling a new season that begins on Sept. 12.

The 2019-2020 season ended in late July — far later than usual due to the COVID-19 pandemic. The EPL suspended play for 100 days due to the virus before finally wrapping up the campaign in the summer.

Liverpool will open their season against newly-promoted Leeds United. Leeds is back in the Premier League for the first time since 2004, but has won the top division of English soccer three times, last earning a title in 1991-92 – the final year before the creation of the Premier League.

These days, Leeds has plenty to prove before rejoining the title race. FanDuel Sportsbook sees Liverpool as a -380 favorite at home against Leeds (+950) in its opening day match.

Two prominent teams will rest on the first matchday. The Premier League granted both Manchester United and Manchester City extended summer breaks due to their European commitments. City only bowed out of the Champions League in the quarterfinals last weekend, while United lost its Europa League semifinal to Sevilla on Sunday.

Heading into the season, oddsmakers have unanimously picked Man City as the favorite to win a third Premier League title in four years. PointsBet lists City as the +100 pick, just ahead of defending champion Liverpool (+175).

If the Premier League proves to once again be a two-horse race, the first key date of the season might come on Nov. 7. That’s when Liverpool travels to the Etihad to take on City for the first time. Liverpool will host the second encounter between the two at Anfield in February.

Sportsbooks see only two of the remaining Premier League sides as realistic threats to the top two. Manchester United comes into the year as the third choice at +800 to win the title, while Chelsea (+1400) also remains in contention. Tottenham and Arsenal start far back at +6600, while Leicester and Wolves are both fetching +10000 odds.

Of the newly promoted clubs, Leeds figures to be the most dangerous – though nobody expects it to fight for a European position, let alone a title. Leeds comes in as a +25000 pick to win the Premier League, while both West Brom and Fulham are +100000 long shots.

Fulham also leads the way in the relegation race. DraftKings Sportsbook sees Fulham (+100) and West Brom (+110) as the clear picks to go back down after this season, with Aston Villa (+175), Crystal Palace (+225), Newcastle United (+225), and Burnley (+250) potentially in danger of relegation as well. 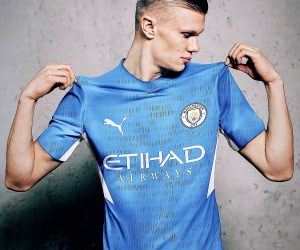 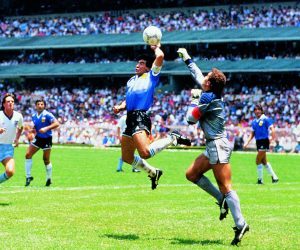 Maradona Branded $9 Million Shirt a ‘Joke’ Because of Poor Quality 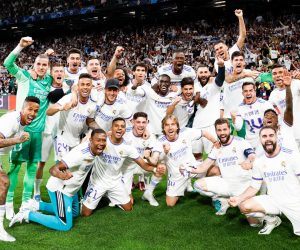 Champions League: Out of This World Finale Leaves Man. City in Shock, Real to Play Liverpool in Final