Magnus Carlsen did what he needed to do in Round 8, beating Aryan Tari to take the lead at Norway Chess. Now, the world champion faces off with the hottest young talent in chess, Alireza Firouzja, who holds second place behind Carlsen heading into Round 9.

Carlsen holds the Norway Chess lead with 16.5 points, while Firouzja sits one point back at 15.5.

Carlsen came into Round 8 as a massive favorite against the struggling Tari, and lived up to expectations with the White pieces. That put the pressure on the other Norway Chess leaders to find wins in their own games to keep pace.

Here are the results for today's round 8. Rest day tomorrow, and then the all-important final two rounds will be played on Thursday and Friday. See you then! #Altibox #NorwayChess pic.twitter.com/Gvy2lYU3Hr

But the other two games ended in draws. Moreover, Jan-Krzysztof Duda and Fabiano Caruana won their Armageddon games over Levon Aronian and Firouzja, respectively, allowing Carlsen to further expand his advantage.

Carlsen now leads Firouzja by a full point. This is critical, as it means that even a Firouzja win in Armageddon will leave Carlsen with a half-point advantage heading into the final round. Nobody else can realistically catch Carlsen: While Aronian (13 points) and Caruana (12.5) are mathematically alive, it would be nearly impossible for either to pass both Carlsen and Firouzja.

Firouzja now trails Carlsen by a point with two rounds to go, but Alireza has White when they play on Thursday after tomorrow's rest day! https://t.co/lzDmqEgFmq #c24live #NorwayChess pic.twitter.com/J7v0fYzrYa

For those who want to look ahead, Carlsen has White in the final round of Norway Chess against Aronian, while Firouzja will also take White against Duda. That means that Firouzja could have a chance to make up ground in Round 10: it’s certainly possible that Firouzja manages to beat Duda while Carlsen is held to a draw, among other scenarios.

I didn’t make any picks for Round 8 of Norway Chess. But the results still hurt a bit: while we’re up big for the tournament, I recommended bets on Caruana, Aronian, and Firouzja to win the tournament. If Carlsen does hang on, that’ll eat into our profits; if Firouzja manages to steal first place, our hypothetical profits will go through the roof.

The big question in Round 9 is just how hard Carlsen will try to fight for a win with Black against Firouzja. Carlsen finds himself in a difficult spot. If he wins the game outright, he wins the tournament. On the other hand, a loss – always a possibility with Black, especially if he presses – would make Firouzja a huge favorite to win. Finally, winning in Armageddon is pretty good (and even a loss in a tiebreaker isn’t a disaster), but it would still leave Firouzja with chances to win Norway Chess with a Round 10 victory.

Carlsen no longer carries the pressure of defending his undefeated streak, so he may feel free to push to put away the tournament with a win. That likely means he’ll play a dynamic position where Firouzja will have chances as well.

Unibet is offering +650 on Firouzja to beat Carlsen in the classical game, and while I don’t expect the youngster to pull it off, I think his chances are better than those odds suggest. Let’s back the kid to get perhaps the biggest win of his career, knowing we’ll cash in big if he succeeds. 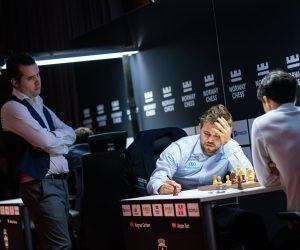