Another Sunday, another miserable loss by the New York Jets. The LOL Jets lost 20-3 to the Miami Dolphins as their slide continues with an 0-11 record. The Jets were shutout against the Dolphins earlier in the season and have now been outscored 44-3 in eight quarters against their AFC East division rival.

We knew the Jets were bad, but this week they were bloody awful. Actually, awful isn’t the proper word to describe their ineptitude, as this team is one loss shy of the franchise’s all-time worst losing streak (12 losses) that were spread out over the 1995 and 1996 seasons.

Jets fans who endured the Rich Kotite era (4-28 in two seasons, including a 1-15 season in 1996) will tell you that those years were the low point of the franchise. However, it’s getting harder and harder to defend the 2020 version of the LOL Jets, as they’re on the cusp of eclipsing the 12-game losing streak.

“It’s as a bad as it gets,” said ex-Jets QB Boomer Esaison. “The Jets need an enema.”

The Jets came into Week 11 knowing that they probably had two chances to win a game during the final seven games of the season. Those included a pair of divisional games against the Miami Dolphins and New England Patriots. Now that the Dolphins crushed the Jets in Week 11, only Bill Belichick and the Patriots stand in the Jets’ way of an imperfect 0-16 season. Based on the bad blood between Belichick and the Jets over the years, it’s safe to say he’s going to do everything possible to win in Week 17 as an exclamation point and middle finger to the inept franchise.

Poor Sam Darnold. The kid never deserved any of this. Darnold missed two games with a sore shoulder and suited up for a rematch against the Dolphins. Darnold responded with an interception on the first drive. He tossed two picks and zero touchdowns. The Jets were shutout in the second half and posted another donut in the fourth quarter. The Denver Broncos had no quarterback and still scored the same amount of points as the Jets with a QB this week. Sad!

Robert Mays from The Athletic wrote a column suggesting five teams that could be in the market for a Darnold trade. Those teams include the Chicago Bears, San Francisco 49ers, Indianapolis Colts, New Orleans Saints, and Pittsburgh Steelers. I sincerely hope Darnold gets a chance to exorcise his Jets demons. Ryan Tannenhill, the ex-Miami QB, now a stud QB with the Tennessee Titans, flourished once he escaped the doom and gloom of an Adam Gase offense.

“It’s frustrating for myself, all the players, I know the fans, everybody’s frustrated,” said Gase. “We’re trying to find ways to get it right. We’ve played tough teams and we have to find a way to beat them.”

Meanwhile, Gase got caught up lying to beat reporters about who’s exactly calling the plays. The reporters watched offensive coordinator Dowell “Waiting for a Bus” Loggains like a hawk all game and noted that he didn’t even have a play sheet in front of him. Yet Gase doubled down on his version of the truth.

I'm puzzled at Gase's answer about the play-calling. It looked like Dowell Loggains was waiting for the bus at times on the sideline. He did not even have a play sheet to look at. #nyj

Follow the Money: LOL Jets Sleep with the Fishes

After beating the spread over the last three games, the Jets went back to their pitiful ways. Last week, the LA Chargers blew a huge lead and let the Jets into the backdoor with a cover. This week, the Dolphins put the clampdown on the Jets. The Fins’ defense made sure that the Jets didn’t score any garbage-time touchdowns. Overall, in eight quarters, the Miami D held the Jets to a meager field goal.

If you’ve been following along this season, then you know that we’ve been fading the LOL Jets every week. We will continue to do so until the Johnson family finally fires Adam Gase. When the Jets finally fire Gase, fans will celebrate like the Ewoks at the end of “Return of the Jedi” with a glorious and festive soiree.

In Week 12, the Las Vegas Raiders visit the crappy turf at MetLife Stadium. The Jets are a +7.5 home dog against the Raiders. The Raiders have been erratic this season and often play down to the level of inferior opponents (e.g., losing to Atlanta in Week 11). You can expect Chucky to rip into the Raiders at practice this week as Jon Gruden doesn’t want to be the coach who loses to the sad-sack Jets this season.

For more weekly musings of a tortured New York Jets fan, take a peek at columns on the LOL Jets. 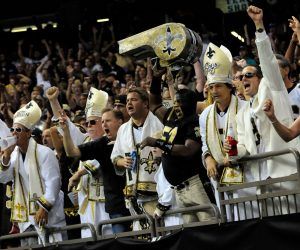