The well-rested and top-seeded Los Angeles Lakers take on the #4 Houston Rockets in the NBA Western Conference Semifinals. The Rockets went the full distance with a seven-game series in the opening round of the playoffs against the #5 Oklahoma City Thunder.

James Harden only scored 17 points in Game 7, but three other Rockets scored 20-plus in the series-clinching victory over the Thunder. Robert Covington and Eric Gordon both led the Rockets with 21 points, while Russell Westbrook added 20 points and nine rebounds.

“It was one of those (off) nights offensively so I just wanted to change the game defensively, and I think I did that,” said Harden.

The Lakers dropped Game 1 of their opening-round series against the Portland Trail Blazers. But then LeBron James and the Lakers quickly reversed course and won the next four games to knock out Damian Lillard and the Blazers.

According to a recent update by DraftKings, the Lakers are +260 odds to win the NBA Championship. The Clippers are the overall title favorite at +210.

The Lakers are -560 odds to win this series and advance to the Western Conference Finals. The Rockets are +370 underdogs to defeat the Lakers.

The Rockets might be playing without any significant rest, but they will test the Lakers in the semifinals.

“They’re gonna be a good matchup for us,” said Anthony Davis. “We’ve been prepping for these guys and try to have the same result and move on to the next round.”

“It’s going to be different for us, but at the same time, we want to make them adjust to us,” said Lakers head coach Frank Vogel. “The same way they try to have teams adjust to them playing small ball. We have to make sure that we dominate them on the offensive glass and also make them adjust to our size.”

Vogel could move Anthony to the #5 spot and then counter with a smaller lineup. Anthony, one of the contenders for NBA’s Defensive Player of the Year, is quick enough to handle spot-up shooters on the perimeter.

While the Rockets tend to get accolades in the scoring department, their postseason defense has impressed everyone.

“Their size and athleticism allows them to cover a lot of ground on the floor, especially in the half-court,” said LeBron. “The Rockets a very scrappy bunch, and they do a good job of turning you over. You’ve got to be very cautious with careless passing, especially in the interior, because they do a really good job.”

LeBron averaged a triple-double in five games against Portland with 27.4 points, 10.2 rebounds, and 10.2 assists per game.

The current version of the Houston Rockets play an updated-version of Mike D’Antoni’s spread offense that he first developed with the Phoenix Suns two decades ago. What the Rockets lack in height (e.g., PJ Tucker is 6-foot-5 and Houston’s center), they make up for with deadly long-range accuracy.

The Rockets led the NBA with a record-setting 45.4 3-point attempts per game in the regular season. In seven playoff games, the Rockets jacked up 51 treys per game. Harden attempts nearly 11.5 3-pointers per game, but he’s only hitting 31% of them.

After getting knocked out of the playoffs by the Golden State Warriors over the past few years, the Rockets face an uphill battle against the #1-seeded Lakers.

“These are the games, you want to win a championship or win playoff games, you’ve got to do it with your heart,” said D’Antoni.

Harden will always get his shots and his points. However, Russell Westbrook will be one of the key factors in the West semifinals. Westbrook missed the first four games with a quad injury. He showed signs of rust in Game 5, but looked like his old self in the last two games (17 points and 20 points) as his minutes increased.

“Russ is an assassin, ” said LeBron. “He takes care of his business and doesn’t care what anyone says.”

Eric Gordon (18.1 ppg) picked up some of the scoring slack when Westbrook was out. Daniel House  (13.3 ppg) did a bang-up job starting in place of Westbrook.

But in the end, it will come down to 3-point shooting and simple mathematics. If the Rockets hit their treys, they’ll keep the series close. If the Lakers can properly defend the perimeter and disrupt Houston’s 3-happy offense, the Lakers will prevail.

For more basketball action, check out all of our coverage of the NBA playoffs. 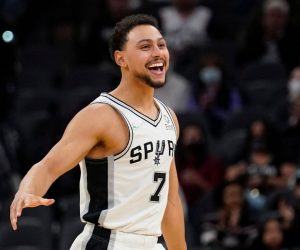 Will the Struggling LA Lakers Finish Above 42.5 Wins This Season?