Nothing can make Boston Bruins fall in love with forward Trent Frederic more than the rookie dropping his gloves and throwing down with an old-school hockey fight during his NHL debut at TD Garden in Boston.

The Boston Bruins (27-17-6) went on to lose to the Winnipeg Jets 4-3 in a shootout, but everyone in New England is talking about the feisty newcomer. The 20-year old rookie energized the crowd, which also included his parents. The Frederics were on hand in Boston to watch their son’s professional debut before the hockey fight broke out.

The Bruins called Trent Frederic up from the minor leagues on Monday and he suited up to play in his first game on Tuesday against the Winnipeg Jets (32-16-2). They were the second-best team from the Western Conference and only the Calgary Flames and Tampa Bay Lightning had more points.

Toward the end of the second period, Frederic tussled in front of the net with Brandon Tanev from the Winnipeg Jets. Tanev went after Frederic and a fight quickly ensued. Frederic dropped the gloves and unleashed a flurry of haymakers and knocked Tanev’s helmet off. Frederic landed a few more punches, which fired up the crowd.

“Welcome to Boston, Trent Frederic!” screamed one of the Bruins announcers from NESN. “Rock’em sock’em robots!”

“I was getting my feet wet, and it just lived up to the hype of my first NHL game,” he told reporters. “It was a lot of fun.”

His parents were in attendance to watch his debut. Even they were enthralled with his pugilistic debut on ice.

Who is Trent Frederic?

The Bruins drafted the 6-foot-2 Fredric out of high school with the 29th overall pick in the 2016 NHL Entry Draft. He played collegiate hockey for two seasons at Wisconsin before he decided it was time to make the jump to the next level. The was the co-captain for the Badgers and scored 32 goals in two seasons. He led the Badgers in scoring his sophomore season with 17 goals.

Fredric thrived in the minors for the AHL Providence Bruins. Most recently, he scored four points in the last three games for the PVD Bruins. The Bruins called him up to the show on Monday. He played in his first game on Tuesday night.

Frederic turns 21 in February. He played on Team USA for the 2018 World Junior Ice Hockey Championships and won a bronze medal. He scored five goals in seven international games.

On Deck for Bruins

The Bruins are currently in the #5 seed in the Eastern Conference, but only a couple of points separate them and the upstart New York Islanders.

The Bruins lost four out of their last five games and dropped five out of seven. They are hoping to correct the ship when the Philadelphia Flyers come to town.

According to the South Point Casino and Sports Book in Las Vegas, the Boston Bruins are 12-1 odds to win the 2019 Stanley Cup. 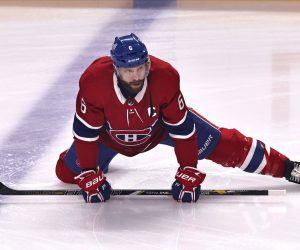 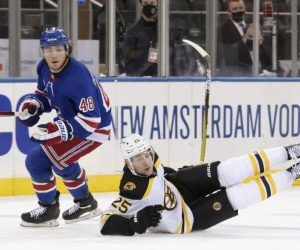