Everywhere you look in Las Vegas, Golden Knights fever is reaching new levels. Locals are all-in on the #nocaps campaign, barbers at Bellagio are creating golden Stanley Cup beards for fans, and casinos up and down the Strip have installed displays supporting the team. And now there’s statistical data to back up just how big the Golden Knights hype really is.

According to TicketIQ, the 2018 Stanley Cup Final has the highest average “get-in” price on secondary markets of any Stanley Cup series since the company started tracking data in 2011. The “get-in” price is defined as the minimum price a fan would have to pay to get a ticket – any ticket – to see a game live.

TicketIQ’s data shows the average price just to get a nosebleed seat is $1,070. That’s well ahead of the next closest series ticket price, which came in 2014 for the clash between the Los Angeles Kings and New York Rangers. The average get-in price for that championship series between two teams from the biggest markets in the country was comparatively affordable at $631.

Both teams in the current Stanley Cup games are contributing to the average ticket price, but it appears the Golden Knights are the big-money driver, with Las Vegas home games going for an average of $2,505 on secondary markets such as StubHub, according to data that TicketIQ collected last week.

Some of these prices might be a bit inflated by scalpers hoping to gauge fans – but not by much. Even today, a look at StubHub found the cheapest tickets to tonight’s Game 2 clash at T-Mobile Arena were going for more than $900.

If watching the game from home is more your speed, Game 1 of the series delivered record ratings for NBC.

Overall, NBC reported an overnight rating of 3.72 as the Knights beat the Capitals, 6-4. This was up compared to the first games of the last two Stanley Cup Finals. But the truly amazing numbers came out of the Las Vegas market. The 28.1 local rating was the highest ever for a Golden Knights game, crushing the 17.9 rating that Game 5 of the Western Conference finals did in the local market.

An even more impressive number, however, might be the 44 share. That means that 44 percent of all people watching television in Las Vegas while the Golden Knights were playing on Monday were tuned in to the game. Capitals fans weren’t exactly tuned out, either: the 16.0 local rating in Washington, DC, was the highest ever recorded for a Caps game.

After a thrilling Game 1, the hype may build to even higher levels for Wednesday’s Game 2 clash. It could be another great night for the home fans, too, as Bwin has the Golden Knights listed as a -161 favorite to take a 2-0 lead in the series. 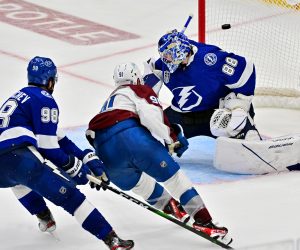