As we examine the college football day slate for Week 6, we don’t have to worry about trying to pin down which Alabama receiver will break the slate, since the Tide is on a bye this week. But teams like Oklahoma, LSU, and Penn State could easily approach 50 points each on the scoreboard this week, so we will want to carefully squeeze players from those teams into our lineups. We’ll also look to add players from another team that could be a sneaky point scorer this week. Minnesota Golden Gophers, anyone?

Joe Burrow, LSU ($8,700 on DK, $10,800 on FD) – Like most college slates, this is one where you want to use a second quarterback in the super-flex spot. Burrow is similar to Hurts, becoming a staple in winning lineups. You might consider Penn State QB, Sean Clifford here too for salary relief ($7,100 on DK), as he has a great matchup against Purdue. You could also think about Minnesota QB Tanner Morgan ($6,500 on DK), who will probably cut up Illinois on Saturday.

Reggie Corbin, Illinois ($5,800 on DK, Game not on FD) – Corbin has become the workhouse for the Fighting Illini, with 38 rushing attempts in the last two games. Look for Illinois to try to grind it out Saturday, and use Corbin for salary relief so you can afford dynamic playmakers at other positions.

Javian Hawkins, Louisville ($5,000 on DK, Game not on FD) – Louisville’s lead back is averaging nearly 17 rushes per game, and the Boston College defense he faces this week ranks 166th in the NCAA against opposing running backs in DFS. Vegas expects Louisville to score 33 points this week, so Hawkins could be a sneaky value play for his price.

KJ Hamler, Penn State ($6,000 on DK, $9,000 on FD) – Hamler looks to build on the big game he had last week against Minnesota, where he caught six passes for 108 yards and a TD. Next up is the weak Purdue defense. Oddsmakers expect the Nittany Lions to roll up about 42 points against the Boilermakers. 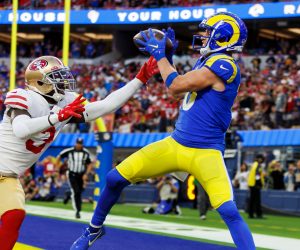