In 1984, Barry Levinson directed “The Natural” starring Robert Redford as Roy Hobbs, a mysterious middle-aged rookie with a checkered past who comes out of nowhere to lead the worst team in the National League, the New York Knights, to the pennant.

TriStar made “The Natural” on a budget of $28 million and it earned $48 million at the box office.

The popularity of the Natural eventually opened the floodgates for Hollywood to produce numerous other baseball movies, including “Field of Dreams,” “Bull Durham,” and “Major League” in the late 1980s.

Barry Levinson first made a name for himself with “Diner” in 1982, and “The Natural” was only his second film. He would later go on to direct huge hits such as “Good Morning, Vietnam” (1987) and “Rain Man” (1988). Levinson also directed a 30 for 30 documentary for ESPN about the old Baltimore Colts marching band.

Young Roy Hobbs grew up on a farm in Nebraska where his father taught him all about baseball, including the mental aspects of the game. He witnesses his father have a fatal heart attack while chopping wood in front of the house before dying underneath a large tree. Later that night, a lightning bolt strikes the tree, splitting it into two. Roy makes a bat out of the split lumber. He names the bat “Wonderboy,” and brands it with its name and a lightning bolt.

A teenaged Roy Hobbs (Redford) wakes up his girlfriend Iris (Glen Close) to tell her that he’s headed to Chicago for a tryout with the Cubs. Hobbs, a local legend, tossed eight no-hitters in high school.

On the train to Chicago, the scout introduces Hobbs to sportswriter and illustrator Max Mercy (Robert Duvall) and the “Whammer” (Joe Don Baker playing a Babe Ruth-type character). During an extended stop, the train passengers mingle at a local carnival located next to the station. The Whammer draws a crowd smacking home runs in a batting cage, including a mysterious woman (Barbara Hershey), while Hobbs draws a small crowd by knocking down milk bottles with a ball.

The scout bets Max that Hobbs can strike out the Whammer on three pitches. Everyone agrees and they set up on the other side of the train tracks. Roy throws the first pitch so hard that the Whammer doesn’t see it. On the second pitch, the Whammer swings and misses. He claims Hobbs threw a spitball, but the ball is clean. The Whammer takes off his jacket and rolls up his sleeves. Hobbs blazes another fastball by the Whammer, who whiffs for strike three. The scout wins the bet. Max pencils a cartoon about the farm boy who struck out the Whammer.

The mysterious woman takes an interest in Hobbs and invites him to her hotel room in Chicago, where she shoots him in the stomach with a silver bullet before committing suicide by jumping out the window.

Sixteen years later in 1939, a middle-aged Roy Hobbs signs a rookie contract worth $500 to play for the last-place New York Knights. The manager, Pop Fisher (Wilford Brimley), refuses to play Hobbs and won’t even allow him to take batting practice. The bench coach, Red (Richard Farnsworth), tells Hobbs that Pop is a former owner of the team who ran into financial problems. Pop also has a preposterous wager that the terrible Knights must win the pennant or he will have to relinquish his minority stake in the company to the majority owner, a former Judge (Robert Prosky).

Memo Paris, Pop’s niece, takes a shining to Hobbs, but Pop tells Hobbs that she’s jinxed and he should avoid her at all costs.

The Knights are bad and their young right fielder, Bump Bailey (Michael Madsen) is an overpriced bust. He dates Memo Paris, whom we also find out, also has a relationship with a bookie named Gus Sands (Darren McGavin).

Hobbs and Pop have a blow-up after Hobbs refuses to sit through a lecture by a psychologist. Hobbs came to New York to play ball. Pop finally gives him his chance and tells him to come to batting practice the next morning. During his first BP session, Hobbs pulls “Wonderboy” out of his case. He clobbers the ball smashing home runs to all parts of the ballpark. Pop cannot believe what he saw and inspects Hobbs’ bat.

During a close game, Bump Bailey fails to hustle on a play and commits an error. “I lost it in the sun,” says Bailey even though it’s cloudy and about to rain.

Pop benches Bailey and orders Hobbs to pinch-hit. On the second pitch, Hobbs hits the ball so hard that he knocks the cover off. The Knights finally win to end their losing streak.

Bailey tragically dies when he runs into an outfield wall trying to shag a ball. Hobbs takes his place in the line-up. The worst hitter on the team likes the lightning bolt on “Wonderboy,” so he sews a lightning patch on his uniform. He begins hitting, which inspires the rest of the team to also wear lightning patches, and the Knights go on a winning streak. The batboy, Bobby, asks Hobbs about the origins of “Wonderboy.” Hobbs agrees to help Bobby make his own bat (the “Savoy Special”).

Memo Paris and Hobbs begin a relationship and he coincidentally gets stuck in a hitting slump. The Knights also hit the skids.

The Woman in White

Hobbs finally busts out of his slump during a road trip to Chicago against the Cubs. He spots his former girlfriend, Iris, in the crowd because she’s all decked out in white. Seeing his old flame inspires him to hit a monstrous home run that breaks the iconic clock in Wrigley Field.

Iris and Hobbs meet in a diner to catch up and both reveal that neither ever married. The next day, she tells Hobbs that she has a son, but his father lives in New York City. After seeing Iris again, Hobbs snaps out of his funk and the Knights jump back in the pennant race.

Hobbs later finds out that the Judge signed him because he thought he’d be a bust. The Judge offers Hobbs $5,000 to throw the season, but he refuses.

During a practice, one of the Knights tells Hobbs to pitch to him. Hobbs reluctantly agrees and whips a speedball by his teammate. Max Mercy, who happened to be sitting in the stands, bolts from his seat because he finally remembers how he knew Hobbs.

Hobbs falls ill and gets hospitalized. A doctor performs emergency surgery on him and removes the silver bullet that had been lodged in his stomach lining for 16 years. While in the hospital, the Knights lose their lead and are forced into a one-game playoff for the pennant against the Pittsburgh Pirates.

In the hospital, Iris visits Roy. He tells her he always wanted to be the best pro ball player.

“There goes Roy Hobbs, the best there ever was in the game.”

Hobbs ignores doctor’s orders and insists on playing. The Judge offers him $20,000 to throw the game so the Knights will lose the pennant and Pop will lose all his shares in the team. When Hobbs refuses the bribe, the Judge tells Hobbs someone else will be throwing the game, so it doesn’t matter.

During the playoff game, Hobbs realizes the starting pitcher, Al Fowler, is the player on the take. Hobbs convinces Fowler to play on the up-and-up, while Fowler accuses Hobbs of tanking it as well. The pitcher hunkers down and Knights trail by one run heading into the ninth inning.

Iris and her son are at the game. She sends Hobbs a message revealing that her son is their son.

Hobbs breaks his bat on a foul pitch and starts to bleed through his jersey. He tells the bat boy to give him the bat they made together. Bobby fetches the “Savoy Special,” and Hobbs hits the game-winning home run. Hobbs hit the ball so high and so hard, that it crashes into the lights, setting off a chain reaction as all the lights explode like fireworks. The Knights win the pennant and Pop gets a chance to buy back his shares and become majority owner once again.

The film ends with Hobbs playing catch with his son in the same wheat field that he played ball with his father almost 25 years earlier, while Iris lovingly looks on.

The Natural: Did You Know?

“The Natural” is based on a 1952 novel by Bernard Malamud with the same title. Malmud said his novel is inspired by Homer and Greek mythology. The novel also drew inspiration from King Arthur. The pennant symbolizes the quest for the Holy Grail that the Knights undertake.

The film version deviates from the source material, especially in the ending. In the book, Hobbs strikes out and presumably takes the bribe. Back in 1939, $10,000 is a lot of money considering Hobbs made only $500 a season, and the Great Depression ended only six years earlier.

The Barbara Hershey character is based on a real-life murderer, Ruth Ann Steinhagen, who shot and killed Philadelphia Phillies first baseman Eddie Watikus in 1949.

Before “The Natural,” Redford appeared in a ski movie about an Olympic hopeful titled “Downhill Racer” (1969).

The stadium scenes for the NY Knights were filmed in Buffalo at old War Memorial Stadium.

Director Barry Levinson didn’t have enough money in his budget to hire an announcer, so he did the voiceovers for the baseball games himself.

With the start of the MLB season delayed due to the coronavirus pandemic, baseball movies have to fill the void. OG wrote about some of your favorite baseball films. 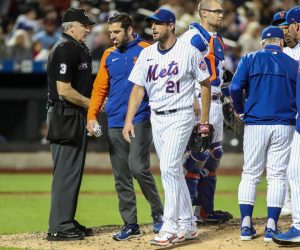