Hockey fans know well that NHL teams always have an emergency goalie in the building, just in case the two they normally keep on the roster both go down in the same game. But they rarely ever see action, and they’ve never made a significant impact on a game – until last night.

That’s when Scott Foster lived the dream of every beer league hockey player in the world, as he was asked to step in for the last 14 minutes of the Chicago Blackhawks’ game against the Winnipeg Jets. The 36-year-old accountant not only played, he stopped all seven shots he saw to preserve Chicago’s 6-2 victory on Thursday night.

How did it happen? Foster is one of three emergency goalies for the Blackhawks who rotate through the duty during the season. That allows Foster to attend 13 games per season at the arena, typically waiting in the press box just in case, but otherwise enjoying the game and going home without incident.

However, things went a little differently Thursday night, as the video shows.

Emergency goalies are on hand ready to play should both a team’s goaltenders go down. Usual Blackhawks starter Corey Crawford was already out, having been injured for a while and making Anton Forsberg the starter. But Forsberg hurt himself during a pregame soccer warmup, leaving recent minor-league call-up Collin Delia from the AHL as the only professional goaltender on the roster.

Dalia made his own NHL debut, playing the first two periods and the beginning of the third. Given the situation, Foster was told to dress before the game, and was signed to a one-day amateur tryout (or ATO) contract, which comes with no compensation.

When Delia left the game with muscle cramps, Foster was told the team needed him to step in. Just hours before the game, Foster was at his day job, “typing on a 10-key,” he would later tell reporters.

After he finished the game without allowing a goal, his new teammates crowded around him to congratulate him, and he was awarded the first star of the game for his performance.

“This is something that no one can ever take away from me,” Foster said after the game. “It’s something that I can go home and tell me kids and they can tell their friends.”

Foster is a former collegiate goaltender who last suited up in a competitive game when he played with Western Michigan University in the 2005-06 season. Since then, he’s mostly played beer league hockey – in fact, he missed his team’s season finale to be the emergency goalie for the Blackhawks.

For a little more fun with hockey’s newest hero, check out this follow-up postgame interview making the social media rounds:

Epic postgame interview from emergency backup goalie Scott Foster, a 36-year-old accountant who played 14 minutes in goal for the Blackhawks in his NHL debut last night and made 7 saves on 7 shots pic.twitter.com/b1mNNIC1zN 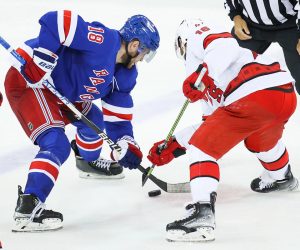