For a second season in a row, Giannis “Greek Freak” Antetokounmpo is leading his team to the best record in the NBA. At their current pace, the Greek Freak and the Milwaukee Bucks would finish the season with a 71-11 record and become only the third team in NBA history to win 70 or more games in the regular season, joining the 2015-16 Golden State Warriors and 1995-96 Chicago Bulls.

The Milwaukee Bucks became the first team to win 40 games after defeating the Charlotte Hornets during a special regular-season game in Paris, France.

In the east, the Bucks are running away with the #1 seed. They extended their lead to eight games over the Toronto Raptors. Meanwhile, five teams in the east are fighting for the coveted #2 seed.

The Bucks started out the season 2-2, but since then, the Greek Freak and the Bucks won 38 out of their last 42 games.

The Bucks went on a smoking, 18-game winning streak in late November and early December. Since they snapped the streak, they’ve gone 16-2.

The Bucks won eight games in a row after a comeback victory over the slumping Charlotte Hornets in Paris.

“The focus and the purpose of this team has been very good,” said Bucks head coach Mike Budenholzer. “We feel like there’s a lot of work to be done, a lot of things to improve.”

The Greek Freak is in the middle of another MVP season. He’s second in the NBA in scoring with 30.1 points per game. He’s averaging 12.9 rebounds per game, which is ranked #5 in the league.

Khris Middleton is second on the team in scoring with 19.7 points per game, while point guard Eric Bledsode averages 15.0 points and 5.1 assists per game.

The 2015-16 Golden State Warriors seemed unbeatable with a 73-9 record. They secured the all-time best NBA record and winning percentage at .890. Steph Curry and the Warriors lost in the NBA Finals to LeBron James and the Cleveland Cavs.

The 1995-96 Chicago Bulls went 72-10 and finished the season with an .878 winning percentage. With Michael Jordan back in the lineup after his “early retirement,” the Bulls secured the best record in NBA history at the time by becoming the first team to pass the 70-win mark.

The Bucks are currently co-favorites with the Los Angeles Lakers and Los Angeles Clippers to win the 2020 NBA championship at 3/1 odds. 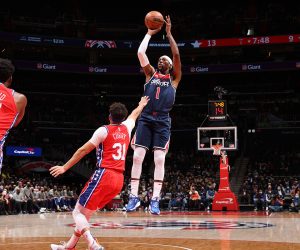