Home Sports Betting Horse Racing McKinzie Goes on the Road to the Crosby, Improbable off to Whitney

Go long and far, or go short and stay home. When it came to deciding where prize colt McKinzie would run next, Hall of Fame trainer Bob Baffert opted for the six-furlong Bing Crosby Stakes at Del Mar over the 1 1/8-mile Whitney Stakes at Saratoga.

Instead, Baffert sends Improbable to the historic race at the Spa, one of the most prestigious American races for older horses. Both the Crosby and the Whitney will run on Saturday.

That means McKinzie won’t defend the Whitney title he won with the best performance of his career. The 5-year-old son of Street Sense beat seven other horses last year, earning a career-best 111 Beyer Speed Figure and giving Baffert his first Whitney title. But Baffert told the New York Racing Association’s Ryan Martin that McKinzie may hit the Spa on the closing weekend for the Sept. 5 Grade 1 Woodward Stakes.

When you’re one of the best trainers in the world, you have options like this. Baffert called the audible based on two factors: McKinzie’s strong five-furlong Sunday morning workout in 1:00.8, and Maximum Security’s San Diego Handicap neck victory over Midcourt. Originally, Improbable’s next stop was the Grade 1 Pacific Classic on Aug. 22 at Del Mar.

“We were going to run him here in the Pacific Classic, but we wanted to see what Max was going to do yesterday,” Baffert said. “I think if Max laid an egg, we would have done that. But Max showed us the horse we all thought he was.”

Baffert avoids running his stars against each other as much as possible, which turns scheduling into a game of musical horses. But one key element McKinzie gives Baffert is flexibility. This is a horse who owns graded stakes victories at distances from seven furlongs to 1 1/8 miles. Running the six-furlong Crosby marks the shortest race of McKinzie’s career.

McKinzie broke his maiden at seven furlongs in his October 2017 debut. He also won the Grade 1 Malibu Stakes and the Grade 2 Triple Bend Stakes in June at seven furlongs – his lone 2020 victory in three races. So cutting back an eighth of a mile shouldn’t be an issue, given his adaptive nature.

“He’s got speed. All good horses have speed,” Baffert said.

McKinzie’s three 2020 races were all over the map. He finished a dismal 11th in February’s Saudi Cup, then won the Triple Bend at Santa Anita against a weak field. As the Met Mile favorite, McKinzie never fired, finishing a poor fifth in a race he nearly won the year before.

Meanwhile, Improbable tuned up for his trek east with a 1:25.8, seven-furlong workout at Del Mar Saturday. He’s coming off an impressive victory in June’s Grade 1 Hollywood Gold Cup at Santa Anita, where he rolled out his career-best 105 Beyer.

Baffert ships Improbable to Saratoga well aware of his well-chronicled gate misadventures. He broke cleanly in the Gold Cup, but when he travels, sometimes Improbable’s focus stays behind.

“The only problem with shipping him is that he has issues in the starting gate, for some reason,” Baffert said. “He doesn’t have (those issues) in California. But he’s doing really well.”

Lexitonian’s Trainer Calls His Own Audible

While Improbable heads east to Saratoga, Lexitonian heads west to Del Mar for the Crosby. The colt was scratched in the gate from Saturday’s Alfred G. Vanderbilt Handicap after Whitmore, the horse in the next gate, broke through the gate before the start.

Joel Rosario, Whitmore’s jockey, immediately pulled him up. Parked on the inside post, next to Whitmore in Gate 2, Lexitonian reared back on his haunches and unseated jockey Tyler Gaffalione. Jack Sisterson, Lexitonian’s trainer, scratched him immediately. The other four horses backed out, reloaded and raced, with Volatile prevailing.

Gaffalione was fine. Lexitonian, meanwhile, got a check-up from a Saratoga veterinarian, passed muster, and turned in a 47.66-second half-mile breeze on Sunday morning. He was the Vanderbilt long shot at 20/1, but is coming off his career-best 95 Beyer in a May allowance victory at Churchill Downs. 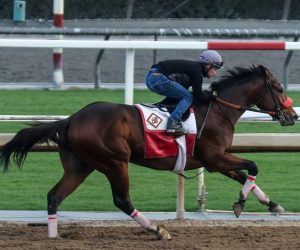 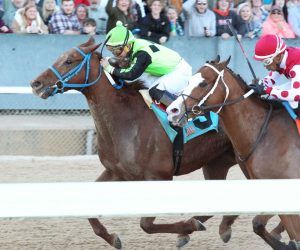 Rated R Superstar Not Ready to Retire at Age 9 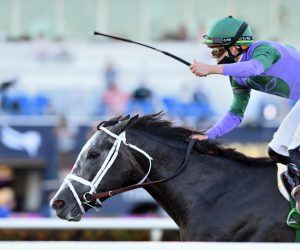