The Los Angeles Lakers continued their search of a head coach and interviewed Kenny Atkinson and Terry Stotts.

Atkinson coached the Brooklyn Nets for almost four seasons before stepping down with the team in 2020. He amassed a record of 118-190 in Brooklyn, but posted only one winning season and one postseason appearance.

The Lakers showed a keen interest in Stotts, who coached the Portland Trail Blazers for nine seasons between 2012 and 2021. Stotts guided the Trail Blazers to the postseason in eight consecutive seasons, yet they lost in the first round in five out of the last seven seasons. He also had head coaching gigs with the Atlanta Hawks and Milwaukee Bucks, but posted two losing seasons with both teams. As an NBA head coach, Stotts has a 517-486 record.

If you watch “Winning Time”, then you’ve seen a young Jeanie Buss featured in the HBO show about her father — the legendary and larger-than-life figure Dr. Jerry Buss — and the rise of the 1980s LA Lakers. The real-life Jeanie Buss is now the controlling owner and president of the Lakers, and she’s trying to win a second title with LeBron James wearing the gold and purple.

When the Lakers won the 2020 championship inside the NBA Bubble in Orlando during the pandemic-shortened season, Buss became the first female controlling owner to win a major sports championship.

LeBron is not getting any younger and he’s starting to miss a notable amount of time with injuries, so the window is shrinking where the LeBron and the Lakers can win another title together.

Buss sat down to an interview with the LA Times. She was not thrilled with the results from her well-paid squad that included the acquisition of Russell Westbrook in a pricey trade with the Washington Wizards.

“I’m growing impatient just because we had the fourth-highest payroll in the league,” said Buss.

The Lakers did not even qualify for the Play-In Tournament and missed the playoffs outright, which was surprising considering they were one of the preseason betting favorites to win the 2022 NBA championship.

Buss shot down any notion that the Lakers would trade LeBron or Anthony Davis for that matter.

“There’s no reason for me to think we can’t win with them,” Buss added. “We just need to find the right head coach.” 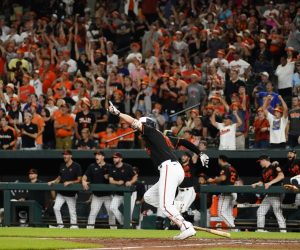