Week 2 of college football features what will likely be some high-scoring and competitive games, with teams like Ohio State, Oklahoma State, and Penn State on the DFS slates.

With so many solid options, it will be tough to narrow down the field. Here are six players from the quarterback, running back, and wide receiver positions to keep an eye on.

CJ Stroud, Ohio State ($8,600 on DraftKings, $11,000 on FanDuel) – Stroud experienced a rough start in the first half against Minnesota, but got over the jitters and finished with solid results while leading his team to victory. Oddsmakers expect Ohio State to put up 40 points on Oregon this week, and the Buckeyes’ excellent passing attack should factor heavily into the offensive output.

Spencer Sanders, Oklahoma State ($7,500 on DK, $9,000 on FD) – The Cowboys’ No. 1 QB missed the opener due to COVID-19 protocols. He returns this week against Tulsa in what should be a relatively competitive and high-scoring game.

Kyren Williams, Notre Dame ($7,300 on DK, $10,000 on FD) – The Florida State defense stuffed Williams last week, holding him to just 42 yards on 18 carries. That isn’t likely to happen again this Saturday when the Fighting Irish take on Toldeo. The most notable Williams’ stat line from last week: six catches for 83 yards and a touchdown. He will be very valuable in point-per-reception formats, such as DraftKings, if that volume carries over to this week.

Jabari Small, Tennessee ($5,800 on DK, $8,300 on FD) – The Vols established a heavy run focus in Week 1 as Small carried the ball 22 times, and Tiyon Evans had 16 totes. Coach Josh Heupel said Thursday that Evans is questionable for Saturday’s game against Pitt, meaning Small will likely see the most action in the running game.

Chris Olave, Ohio State ($7,200 on DK, $9,800 on FD) – Olave caught just four passes last week, but they proved big: 117 yards and two touchdowns. The senior receiver with NFL-level talent will be the primary option for CJ Stroud going forward, and could be in for a monster game against Oregon.

Lucas Krull, Pitt ($3,700 on DK, $5,400 on FD) – The Florida transfer made a quick impression to open 2021, with five receptions for 58 yards and a touchdown in the opener against UMass. It appears likely that Kull will be a focal point of the Pitt passing game, and could pay dividends for a cheap salary in what’s expected to be a competitive game against Tennessee this Saturday. 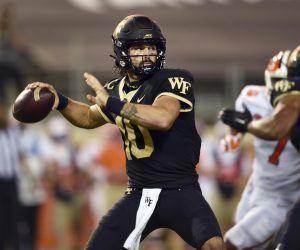 Sam Hartman, Jaquarii Roberson Could Be DFS Bounties This Saturday

Oklahoma State Favored vs. Oklahoma in Must Win Bedlam Clash for Both Sides