Bartolo “Big Sexy” Colon, who turns 47 on Memorial Day weekend, wants to play one more season of major league baseball. If Colon has his way, the former Cy Young winner would love to end his career with the New York Mets.

Colon last pitched in the majors in 2018. He’s since signed with the Mexican League’s Acereros de Monclova in hopes of latching on with a MLB club.

“I thought that last year, maybe I would have the opportunity,” Colon told ESPN. “I know that if it didn’t happen last year, this year would be less likely. I’m getting older and the game is all about the young pitchers coming up. When you get older, teams no longer need your services.”

“If it was up to me, I would retire with the Mets,” said Colon. I would like my career to end in New York.”

Colon remarked that his stint with the Mets between 2014 and 2016 marked the happiest of his career.

Colon grew up in the Dominican Republic. He began his career with the Cleveland Indians in 1997. He spent his longest tenure in Cleveland, where he won 75 games in six seasons, including an 18-5 season in 1999. The Indians traded him to the Montreal Expos midway through the 2002 season.

Colon spent four seasons with the LA Angels. Heck, he’s so old, they were called the Anaheim Angels when he joined them in 2004. In 2005, Colon went on a heater during a Cy Young season. He went 21-8 with Angels for his best career-season.

Colon currently finds himself tied with Jack Quinn for 50th all-time in MLB wins by a pitcher. He’s only four behind Bob Gibson and CC Sabathia, who have 251 each.

With both Colon and Sabathia no longer on an MLB roster, Justin Verlander (Houston Astros) holds the record for most wins by an active pitcher with 225. 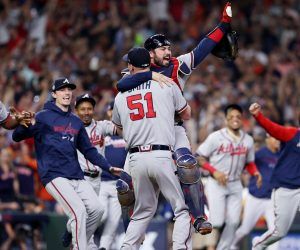