Bowman, who was 22/1 to win at Talladega, outdueled Corey LaJoie and Ryan Preece in the overtime finish. Team Chevy had four of the top five finishers, and seven of the top 10. Preece was third, Garrett Smithley fourth, Landon Cassill fifth, Byron sixth, Brennan Poole seventh, and Kurt Busch ninth.


Bowman credited extra preparation as one of the reasons he was victorious in Sunday’s virtual run at Talladega.

“You know, I think it obviously ‑‑ last week at Richmond, we didn’t run very well, and that came down to a lack of practice, but I think this week I ran a little bit, and it ended up being enough, so that was good,” Bowman said. “But yeah, it’s been a learning curve for sure, and I’ve kept myself busy in other ways, so probably haven’t put the same amount of time into it as some of the other guys have. Probably take it a little more lighthearted than some of the others do, as well, but that’s just kind of my approach to it.”

Strategy Pays Off For Bowman

Another reason for Bowman’s victory was his late-race pit strategy that allowed him to restart at the front of the pack. He never relinquished the lead after taking over first place.

“I guess just right place, right time, kind of the normal speedway racing deal,” Bowman said. “I felt like the bottom wasn’t the place to be, so kind of let Ty have the bottom on that restart and got up, and just tried to keep the run timed well and knew that most of the time the top was leading there at the start‑finish line. So really just got to thank Preece for pushing me because that’s what made the difference at that point.  When you’re that lead car, it’s really the guy behind you making the difference. Glad it worked out.”

Jeff Gordon made his virtual racing at Talladega and finished 38th of 39 drivers. His performance included a spectacular crash that flipped his car, but Gordon said he enjoyed the experience.

“It’s incredibly realistic,” Gordon said. “I loved being a part of it, it was great being back in there in the action and competition on the track. I had a blast.”

Denny Hamlin finished last because his screen went blank during the race. The reason: his daughter turned it off with a remote. The video of Hamlin’s explanation and the guilty child can be seen below.

I had so many questions about what just happened.. then we found 2nd hand footage at the end. I cannot believe it. pic.twitter.com/BfN1sNAsg8 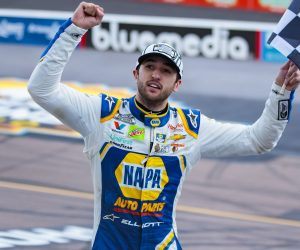