A dangerous ice storm and inclement weather prematurely ended Stage 19 of the 2019 Tour de France, a 126.5 km ride in the French Alps from Saint-Jean-de-Maurienne to Tignes, when organizers called the race due to hail and mudslides. Despite the shortened stage, Egan Bernal (Team Ineos) opened up a two-minute gap over leader Julian Alaphilippe and he seized first place and the yellow jersey with two stages remaining.

As riders began their descent of Col de l’Iseran, word got about the ornery weather. A storm dumped iced, snow and hail. Mudslides covered the later stages of the race before the finish line at Tignes.

It took several minutes before teams were able to relay the news to the riders out front. Some were confused or outright angry.


Colombia’s Egan Bernal (Ineos) reached the top of Col de l’Iseran first. He opened a 2:02 gap over Julian Alaphilippe, who had hoped to regain ground on the descent. Bernal built up a big enough lead to seize the yellow jersey.

Bernal picked up 32 seconds in Stage 18 at Col du Galibier and he trailed by only 92 seconds coming into Stage 19. Defending champ Geraint Thomas retains third place and he’s only 1:16 behind his teammate.

Everyone expected something big would happen during the second day of action in the Alps for Stage 19. No one anticipated bad weather would be the big story in the Tour de France. The course from Saint-Jean-de-Maurienne to Tignes is only 126.5 km but it included a pair of arduous climbs over 2,000 meters. Col de I’lseran is a category H climb with a peak at 2,770.

The bookies listed Egan Bernal as the favorite to win Stage 19. Bernal led everyone at the time of cancellation.

Alaphilippe looked like he was on the ropes on the ascent, but he gutted it out. As soon as he reached the top of Iseran, Alaphilippe shifted into his crazy gear and aggressively attacked the descent. He lacked the same panache as his descent in Stage 18 and didn’t erase the gap. However, he was not going to allow Bernal to gain any more ground.

“We are all the in the same situation,” Alaphilippe told VeloNews. “I don’t have any regrets and did as I have always said I would. I did my maximum.”

Thibaut Pinot (Groupama-FDJ) came into Stage 19 in fifth overall, but the Frenchman could not finish the stage and dropped out due to a knee injury. Thibaut won a summit finish at the iconic Tourmalet in the Pyrenees last week.

“I did all I could,” said a tear-filled Thibaut. “I believed I might have had a chance, that it would pass. But unfortunately it did not. I was convinced I could possibly win, but unfortunately now I will never know. It will be hard to get over this.”

Julian Alaphilippe wore the yellow jersey for 14 straight days before someone caught from Team Ineos caught him. For non-cycling fans, Alaphilippe became an overnight sensation. His aggro-attack on the descent in the Alps went viral and will forever become a part of Tour de France lore.

Alaphilippe is France’s last hope to have a Frenchman win the Tour de France for the first time since 1985.

“I pushed myself each day,” said Alaphilippe. “Today I did in the last climb and on the descent, where I ended up in the car. I want to thank all my supporters. I don’t have any regrets.”

With two more stages remaining and one more in the Alps on Saturday, the race is far from over. If Alaphilippe can overcome his current deficit, it will be one of the greatest comebacks in cycling history.

Stage 20 is a difficult 130 km ride from Albertville to Val Thorens. Riders will face three climbs with essentially two ascents above 2,000 meters.

Cormet de Rose, a 19.9 km category 1 climb, precedes the longest descent of the stage. The second climb up Cote de Longfory is category 2. The summit finish in Val Thorens is 2,365 meters and a hellacious category H climb.

Oddsmakers listed Egan Bernal as the favorite to win Stage 19 at 2/1 odds. Simon Yates won two stages already. He’s 5/1 odds to win his third. Geraint Thomas is 8/1 odds, while Mikel Landa is 11/1 odds to prevail in the final stage in the Alps.

Stage 21 takes place in Paris on Sunday. According to William Hill, Egan Bernal is a 1/6 odds to win the 2019 Tour de France. His teammate, defending champion Geraint Thomas, is 8/1 odds to win two years in a row.

Steve Kruijswijk (Jumbo-Visma) is in fourth overall, but less than 90 seconds off the lead. The quiet Dutchie is 25/1 odds to pull off a Stage 20 upset.

With Pinot dropping out, Julian Alaphilippe is France’s only hope. However, bookies do not have faith in Alaphilippe now that he lost the yellow jersey for the first time in two weeks. He’s 33/1 odds to win. 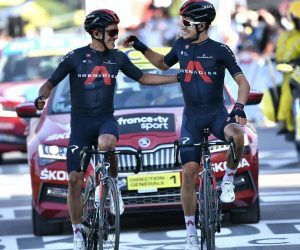