While Sister Jean Dolores Schmidt might be preoccupied praying for her Loyola-Chicago team in the NCAA Tournament, sportsbooks have been busy including her in their slate of Final Four prop bets. The 98-year-old team chaplain has been a fixture on the Ramblers sideline, and now she’s getting attention from internet betting sites.

BetDSI has three wagers on the nun during the team’s Final Four game against Michigan on Saturday. It is part of a unique page of side bets listed on their website.

The first bet you can put money down on is the number of times Sister Jean is mentioned by announcers during the game, from the tip off to the final whistle. The line is set at 4.5 with the over at -120 and the under at -110.

The second bet is on the number of times CBS will show her during its telecast, beginning at the tip to the final whistle. The over/under is currently set at 1.5, with the over at +120 and the under at -150.

If you’re looking for a bigger gamble, then place a bet on whether or not a Sister Jean bobblehead will appear on the TV broadcast. Yes is -250, while the no is +200.

Sister Jean has become a familiar figure sitting court-side in a wheelchair, a symbol of Rambler excitement and tournament prayers. Loyola-Chicago is capitalizing on her popularity by using her name and likeness on t-shirts and other merchandise.

“We weren’t going to do anything until she gave her blessing,” Tom Sorboro, the university’s senior associate athletic director, told ESPN.com.

Will announcers Jim Nantz, Bill Raftery, Grant Hill, or Tracy Wolfson have anything to say about the college recruiting scandal? That’s another area available for betting. Even though any teams mentioned in the FBI report on the matter have already been eliminated from the tournament, BetDSI is letting bettors who think bribery and corruption will still be part of the Final Four narrative put their money where their mouth has been.

The first bet is whether the phrase “NCAA investigation” will be uttered during either of the two semifinal games. The yes and no are both -115 — same as the odds for the alternative phrasing “NCAA violations.” The word “scandal,” however, is more of a favorite, with the yes listed at -130, and the no at +100.

Another unique available bet is on how many underclassmen among the four remaining teams will declare themselves eligible for the NBA Draft after the tournament (thereby rescinding their college hoops eligibility). The line has been set at 1.5, with the over at +130 and the under at -160. They have until April 6 to declare for the bet to pay off. 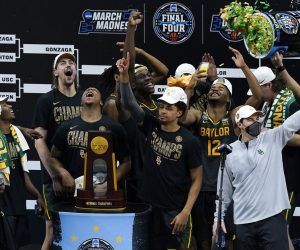 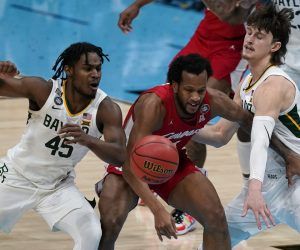 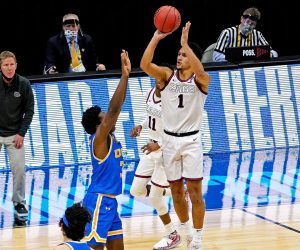