The regular season has approximately 25 games remaining, and the NL Wild Card is still wide open with the Washington Nationals having a lock on the top spot, but five other teams fighting for the second and final National League Wild Card berth with the Chicago Cubs, Philadelphia Phillies, and Arizona Diamondbacks battling for the final berth.

The Atlanta Braves have the inside track for the NL East and the LA Dodgers locked up the NL West by the All-Star Break. Meanwhile, the St. Louis Cardinals are currently leading the NL Central by three games over their rival the Chicago Cubs.

The NL Central looked like a tight three-way race a month ago, but the Cards got hot and the Brewers imploded. The Cards seized first place, while the Brew Crew fell seven games back.

The Brewers are still fighting to stay relevant in the playoff hunt. With 24 games remaining, the Brewers are trying to catch the Cubs to secure the final Wild Card spot.

According to William Hill, the Cody Bellinger and the LA Dodgers are the top dog in the NL with 5/2 odds to win the World Series. The Atlanta Braves are 7/1 odds and look like a worthy sleeper in October. The first-place Cardinals are now 14/1 odds to win the title.

Out of the NL Wild Card bubble teams, the Washington Nats have the best odds at 14/1, followed by the Chicago Cubs at 20/1. Meanwhile, the Brewers and Phillies are 40/1 odds to win the World Series.

The Washington Nationals got hot at the right time winning 17 out of their last 21 games. With the Braves locking down the AL East, the Nationals and Phillies were jockeying for position for second place. The runner-up in the division would most likely gain a Wild Card, while the third-place squad would be battling with the fierce AL Central teams for the other spot.

The Nats won without their ace Max Scherzer. Since returning to the rotation in late August, Scherzer has three no decisions, but the Nats are 3-0 in those games. Scherzer is still shaking off the rust after missing almost a month of action, but they hope their big dog will return to form by the start of the postseason.

The Nats have the benefit of the best road record (37-31) out of the NL bubble teams. However, they face tough competition with 12 games against division leaders. The Nats also have 13 more road games, but finish the season with eight home games including five games in four days against the Phillies.

The math geeks have faith in the Nats. Fan graphs projected the Nationals as a 90.8 percent shot at advancing the postseason.

El Mago and the Cubbies turned around their fortunes with 11 wins in the last 16 games. They were in the middle of a 1-5 skid after getting swept by the Phillies in mid-August.

The Cubbies have a favorable record, but finish the season with 7 out of its final 10 games against the first-place St. Louis Cardinals. The Cubbies could technically run the table and steal away the NL Central crown. Then again, their rival down in St. Louis could also prevent the Cubs from a postseason berth with a fatal death blow in the final weekend of the season.

According to Fangraphs, the Cubs are an 81 percent chance to advance to the playoffs.

On August 1, the Phillies were six games over .500 and looking like the team to beat in the NL Wild Card. They went 12-14 in August and finished the month 5-7 to fall out of the Wild Card spots.

The Phillies are currently on the NL Wild Card bubble and looking in. They trail the Nationals by six games, but find themselves 2.5 games out of the Wild Card. Bryce Harper and company better get hot quickly if they want a shot at the playoffs.

At least 15 of the Phillies’ last 25 games are against playoff-ready teams. According to Fan Graphs, the Phillies are a 5.3 percent shot at the playoffs.

The Arizona Diamondbacks probably will not make the playoffs, but they made the NL Wild Card even more interesting. The D-backs won 11 out of their last 15 games. They recently took three out of four from the LA Dodgers to put themselves back in the playoff hunt.

The bookies (and public as well) do not have too much faith in the Arizona Diamondbacks. They recently improved from 100/1 odds to 70/1 odds during their recent streak. You can find the Diamondbacks as low as 60/1 odds to win the title according to William Hill. 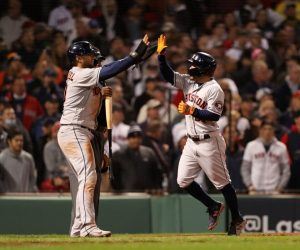