Two former European champions were eliminated from the Champions League qualifying process on Tuesday, as Scottish giants Celtic and Portuguese side Porto were upset by lesser-known opposition in the third qualifying round of the competition.

Celtic, which won the European Cup in the 1966-67 season and remains the only Scottish club to become European champions, was defeated 5-4 on aggregate by Romanian side Cluj.

Celtic appeared to be in good shape, having earned a 1-1 road draw in the first leg in Romania. After a flat first-half on Tuesday, they rallied to take a 3-2 lead at home thanks to second-half goals by James Forrest, Odsonne Edouard, and Ryan Christie, giving them a tenuous lead with about 15 minutes left to play.

But Billel Omrani scored for the second time in about seven minutes for Cluj to knot the aggregate score at 4-4 in the 80th minute. That alone would have been enough to the Romanian side to advance on away goals, but they put the match away when George Tucudean scored an insurance goal deep in stoppage time to stun Celtic supporters.

“If we played anywhere near as well in the first half as we did in the second half, we would have been though,” Celtic manager Neil Lennon told reporters after the loss. “To score three goals at home and not win the game, we’ve only ourselves to blame.”

This marks the second straight year that Celtic has been bounced in the third qualifying round, with Greek club AEK Athens eliminating them at the same point last season.

Those results have been disappointing for the Glasgow club. Celtic had made the Champions League group stage in the previous two seasons, and while it was never a threat to win the competition, just reaching that stage was a financial windfall for the team.

Rangers manager Steven Gerrard, who is preparing his side for a Europa League qualifier against Danish side Midtjylland, warned that his team will have to use the Celtic result to motivate themselves to play a strong second leg, and that the repercussions from such losses impact all of Scottish soccer.

“It’s certainly going to be detrimental because all the Scottish teams need to do as well as we can to improve the coefficient and give ourselves an advantage in these European competitions,” Gerrard told the media. “From that aspect, [Celtic’s loss] is very disappointing. But for me, I’m the manager of Glasgow Rangers and my focus is on the challenges that face us.”

Rangers holds a 4-2 lead after the first leg against Midtjylland. At FanDuel Sportsbook, the Scottish side is a -155 favorite to win the second leg at home as well. Celtic will now drop down into the playoff round for the Europa League, meaning the two Scottish teams could end up playing each other in the second-tier European competition.

In another major upset, two-time European champions Porto lost 3-2 at home to Russian side Krasnodar, who overcame a 1-0 home loss to tie the aggregate score at 3-3 and win on away goals. Other highly regarded teams struggled, but managed to go through: Ajax scored a 5-4 aggregate win over Greek side PAOK, while Red Star Belgrade needed a long penalty shootout to sneak past Copenhagen.

The 12 remaining teams in qualifying will have one more playoff round to determine the six teams that will join the automatic qualifiers in the Champions League group stage. Manchester City (+380) is favored to win the competition this year, ahead of other European powerhouses like Barcelona (+500), defending champions Liverpool (+650), and Juventus (+800). 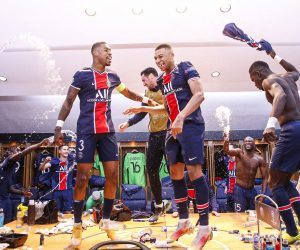